Briton Cal Crutchlow has rolled the dice and will ride for Ducati on the Desmosedici from next season. 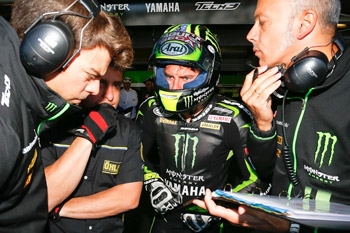 Cal Crutchlow will leave Tech3 for a spot on the Ducati Desmosedici in 2014. Image: MotoGP.com.

Briton Cal Crutchlow will join the Ducati stable for a two-year deal from 2014, slotting into the factory seat vacated by American Nicky Hayden.

The move, reported by BBC Sport, ends months of speculation about Crutchlow’s future, with the standout satellite rider expressing his public frustration at a lack of factory support from Yamaha.

With Crutchlow’s seat at Herve Poncharal’s Tech3 team already earmarked for the incoming Pol Espargaro, and Bradley Smith’s deal done, Crutchlow was left to weigh up the options available.

He has constantly stated his goal to be on board a factory bike, and for the immediate future, Ducati was the only option available.

With Ducati regularly running outside of the top five and below both Honda and Yamaha satellites, the move may come as a surprise.

Crutchlow has scored four podiums from nine starts in 2013, along with claiming his maiden MotoGP pole position ahead of favoured factory machines.

It is unlikely that, on current form, a move to Ducati could replicate these results, but the Italian marque is staying set on its course of a two-year recovery plan in the sport, detailed at the start of the year by new Ducati Corse chief executive Bernhard Gobmeier.

Audi’s buyout of the brand has seen plenty of internal changes, with the central goal to reinvigorate the factory outfit’s MotoGP effort and make the Desmosedici a more competitive machine.

An official confirmation from Ducati is expected shortly.