New Australian Superbike Championship points leader Wayne Maxwell expects title rival Glenn Allerton to bounce back to his best in the closing stages of the season and setup a challenging contest for the 2013 title. 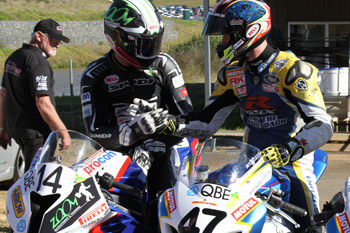 New Australian Superbike Championship (ASBK) points leader Wayne Maxwell expects title rival Glenn Allerton to bounce back to his best in the closing stages of the season and setup a challenging contest for the 2013 title.

Maxwell has tasted his share of hard luck in the past, and the Team Suzuki rider said he could empathise with Allerton after his title rival’s tough showing at the Sydney Motorsport Park double header.

“Every rider out there is putting their heart and soul into racing,” said Maxwell. “They might go about it different ways at times, but they’re all chasing the same thing.

“Away from the track they’re putting in the work and we know how committed Glenn is to his training and off-track preparation. To make that unfortunate mistake that Glenn did in the race is never nice.

“If I am in a position to win this championship, then I just hope I can look back at the end of the year and see that the points gap is more than what he lost in that race, and it shows I was a true championship contender and not a winner by default.”

Maxwell headed in to the round four and five contest with a 14-point deficit to make up on Allerton, and, scoring 38 points more than the BMW rider, takes a 24-point advantage to round six.

Despite the turnaround, Maxwell is aware that Allerton is still well in the hunt and said it would be unwise to underestimate his tenacious nature.

“Glenn is super competitive, and has been all year,” said Maxwell. “He’s a racer, and he’s not going to leave anything on the table.

“I am expecting he’ll put up an almighty fight, which we’ll have to be ready for. We can’t underestimate what he is capable of. The last two rounds are going to be close, that’s for sure.”

The pair will go head to head again in just over a month’s time when the ASBK returns to Hidden Valley for its penultimate meeting on 12-15 September.