Cudlin not giving up on IDM Superbike title hopes

Australia's Damian Cudlin has vowed to overcome his streak of bad luck and fight for the IDM German Superbike title until the very last lap. 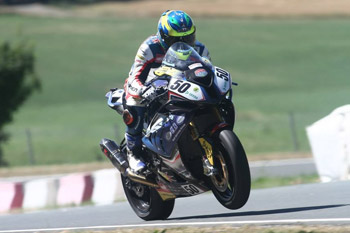 Damian Cudlin in action at Schleiz.

Australia’s Damian Cudlin has vowed to overcome his streak of bad luck and fight for the IDM German Superbike title until the very last lap.

The RAC Racing Team BMW pilot has endured a horror run of luck of late, beginning at the previous IDM round at the Red Bull Ring where he crashed out of the second race at high speed because of a brake problem.

Cudlin soldiered on and suited up for BMW Motorrad France Team Thevent at the Suzuka 8 Hour, but another brake drama in the early stages of practice saw the Aussie sustain a fractured left tibia.

He worked with physio staff and trainers at a local gym to prepare himself for the IDM event at Schleiz, eager to keep a hold of his title lead.

“The leg held up really well during practice and qualifying which surprised me more than anyone else,” said Cudlin. “I only did very short runs on the bike to rest it as much as I could but it was clear that we were on the pace anyway.”

Qualifying his BMW on the front row, Cudlin’s luckless run would continue when he crashed out of the opening race as he sought to make up position on the opening lap.

“The crash was my fault,” he explained. “I got boxed in at turn one and was a bit too aggressive on the opening lap trying to make my way to the front again.

“Fortunately I fell on my right side and managed to keep my injured leg out of any trouble, which meant I was able to restart in the second race.”

Compounding a difficult showing, a mechanical issue reared its head in the second race, forcing the Aussie to retire while running a safe fourth.

“Our bad luck just hasn’t stopped this year and this result is a real kick in the guts,” he said. “We’ve all worked really hard and certainly deserved a lot better, but that’s the way racing is sometimes.

“We just need to turn it around now and come back swinging. There are still plenty of points up for grabs so it’s not over yet. One thing for sure is that I’m not giving up.”

The result meant Cudlin went for a third straight race without scoring a single point, with his solid championship lead whittled away to a 41-point deficit.

Two more rounds remain for the experienced Aussie to fight back and re-assert himself as he did in the opening rounds.