Stauffer hopeful of shaking injury concern for Darwin ASBK round

A battle-weary Jamie Stauffer will use the break between rounds of the Australian Superbike Championship (ASBK) to focus on a return to full fitness. 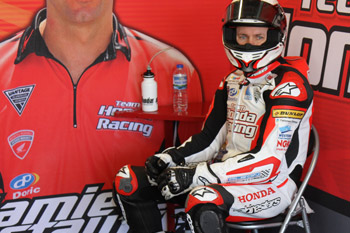 Jamie Stauffer is hoping to recover to his regular frontrunning form for the next round. Image: Toby Lynch.

A battle-weary Jamie Stauffer will use the five-week break between rounds of the Australian Superbike Championship (ASBK) to focus on a return to full fitness.

The Team Honda Racing pilot is a regular contender for race wins but has been hamstrung by a problematic pelvis injury which reared its head at Sydney Motorsport Park’s double header event.

Stauffer crashed heavily in testing in the week prior to round three at Queensland Raceway, and despite his best efforts, found himself shy of his regular winning form.

The weekend prior to the Sydney event saw Stauffer and teammate Josh Hook contest the Suzuka 8 Hour, and, just four days later, take to the track for a further four days.

Though he was able figure in the fight for a podium on Saturday, Stauffer said his injury had affected him and hoped that the break in proceedings would allow it to heal naturally.

“Now we have some time to work on the bike before Darwin and I also have some time to let my injuries heal,” he said. “Having raced at the Suzuka 8 Hour and then straight after that to race here at a double-header was a bit difficult with pelvic injuries.

“Now I have some solid recovery time before Darwin so I’ll be looking forward to that event to get back on top of things.”

The two-time ASBK champion sits fourth on the standings, two points ahead of teammate Josh Hook with two rounds left to run.