A tribute to late world champion Barry Sheene will be staged ahead of the Hertz British Grand Prix at Silverstone next Sunday. 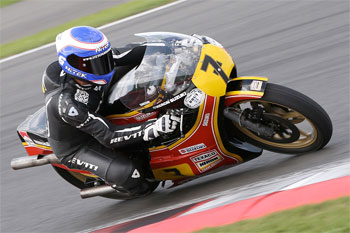 A tribute to late world champion Barry Sheene will be staged ahead of the Hertz British Grand Prix at Silverstone next Sunday.

Next weekend’s Tribute Parade, marking the 10th anniversary year of Sheene’s passing, will take place between the Moto2 and MotoGP races. It will feature several of Sheene’s family members as well as former teammates and rivals, riding a selection his bikes.

Those riding in the parade will include Freddie Sheene, son of Barry, brother-in-law Paul Smart who is a former Grand Prix racer himself and nephew Scott Smart, currently competing in the British Supersport championship.

Barry’s daughter, Sidonie, will also be in attendance to watch family members and former riders – such as Steve Parrish and Randy Mamola – riding at Silverstone.

“The tribute to Barry will be a fantastic spectacle and will mean a great deal to the fans coming along to the British Grand Prix,” says Steve Parrish, former teammate and a close friend of Sheene’s.

“There will be a lot of fans of my generation who remember Barry Sheene, as well as younger fans who – while they wouldn’t have seen Barry race – will have heard a great deal about him.

“I think it’s a wonderful tribute; obviously he was the last British premier class champion, but it will also mean a great deal to me – I’ll be very proud out there, riding a bike that he last raced here in ’79, in that epic encounter with Kenny Roberts.”

Sheene’s best result at Silverstone came in 1979, pipped to victory by Kenny Roberts by just three hundredths of a second following a duel during which Sheene famously waved at his American rival.