Aussie Gareth Jones is within striking distance of a top three finish to his 2013 IDM German Superbike Championship campaign after a consistent weekend of results at Hockenheim. 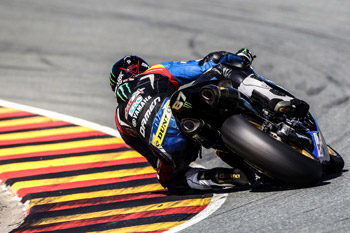 Gareth Jones took 4-3 finishes at Hockenheim and looks towards a strong finish to his 2013 campaign.

Aussie Gareth Jones is within striking distance of a top three finish to his 2013 IDM German Superbike Championship campaign after a consistent weekend of results at Hockenheim.

The penultimate round was a rewarding one for the Queenslander, who found himself battling countryman Damian Cudlin in both races.

The Yamaha Motor Deutschland rider made a solid start to the opening stanza and quickly moved into fourth behind Cudlin.

He staged a late race charge but ultimately missed the podium by around three tenths of a second.

The second race would see a similar battle play out, this time as Cudlin ran second and Jones third.

Jones saved his tyre for the closing stages but couldn’t pass his wily rival, consolidating for the final podium position and collecting good points for his outright tally.

“We had good pace this weekend and I was able to ride two very consistent races aboard the R1,” said Jones. “It’s great that we have been able to take away a positive feeling from Hockenheim and I’m looking forward to making the final attack on improving our championship position in a few weeks.

He recognised the efforts of his Monster Energy-backed Yamaha outfit to prepare a bike that could run top three against strong competition.

“My team have given me a very competitive package all year and have never stopped working to improve it,” he said. “We tried a lot of things over the course of the weekend to find a solid race setup and it really paid off!”

He’s now just three points away from Michael Ranseder in the hunt for third outright.

The final IDM German Superbike Championship round will be held at the Lausitzring on 11-13 October.