Honda Australia has confirmed that the one-off special edition CBR1000RR SP will be released in Australia during the first quarter of 2014. 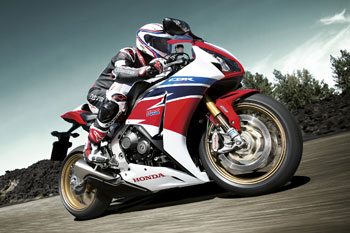 Honda Australia has confirmed that the one-off special edition CBR1000RR SP will be released in Australia during the first quarter of 2014.

Honda unveiled the bike earlier this year, featuring a track-focused upgrade over the regular Fireblade (click here for details).

The CBR1000RR SP has been given an extra edge thanks to Öhlins front and rear suspension, Brembo monoblock front brake callipers, a single seat unit and special Tricolour livery.

In addition it features factory-matched pistons and con-rods, to ensure optimum internal balance.

The CBR1000RR SP’s die-cast aluminium twin-spar frame is based on that of the standard machine, with modifications to match the Öhlins suspension. During development the frame was tuned to increase rider feedback with the suspension’s different performance parameters.

The rigidity balance around the rear suspension mount has been revised to give more flex and therefore feel, for traction. As on the CBR1000RR the aluminium gull-wing swingarm operates through MotoGP-derived Unit Pro-Link rear suspension.

Fully adjustable, the 43mm inverted fork and rear shock were developed specifically for the CBR1000RR SP to offer superbly balanced all-round performance and greater potential for cutting lap times on a closed circuit.

The CBR1000RR SP has the same aggressive riding position as the standard machine offering outstanding control, leverage and acceleration.

Brembo mono block four-piston callipers were chosen because of their compatibility and performance potential with the Öhlins fork. The calliper body is standard but Brembo manufactured special pistons for use in the new machine, with pad material designed to give consistent and linear feel when braking hard from high speed.

As a track-focused machine there’s no provision for a pillion allowing the sleek single seat unit to save weight. Further marking the CBR1000RR SP out from the crowd is its own unique Tricolour livery that is complimented by Pirelli Diablo Supercorsa SP gold tyres.

In Japanese to give something ‘edge’ is to add polish, Honda’s special edition CBR1000RR SP offers just this – the legendary Fireblade with extra edge making it the ideal machine for the dedicated track day goer.

Due to reach Australian shores in strictly limited numbers in the first quarter of 2014, details regarding exact arrival date, how to order, and the price of the new CBR1000RR SP will follow in the coming months.