Late Italian to be honoured at 2014 Italian Grand Prix. 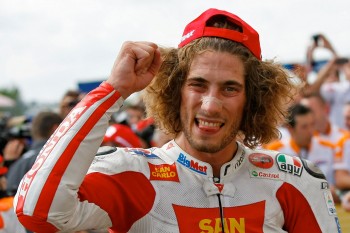 Italian rider Marco Simoncelli is to be inducted into the Hall of Fame as a MotoGP Legend.

The popular former 250cc World Champion was a front-runner in the premier class before tragically losing his life to an accident in 2011. In becoming a MotoGP Legend, Simoncelli’s name will be the 21st on the list as he joins a list of 20 other greats.

To the shock of race fans around the world, the Gresini rider lost his life on Sunday 23 October 2011 in a crash on the second lap of the Malaysian Grand Prix, just one week after finishing in second place at Phillip Island.

The Italian rider dazzled the world championship paddock with his charisma, ability and racing style and was a world champion, having taken the 250 crown in 2008 – a title he narrowly missed out on defending in 2009.

Arriving in the premier class in 2010, his progress was rapid and before his untimely death Simoncelli had already taken two premier class podiums and two poles in a strong second campaign.