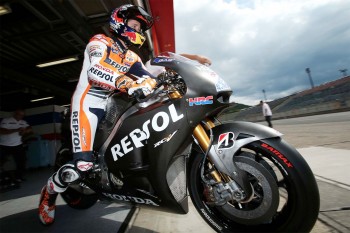 Upon retirement ahead of last season, the 2007 and 2011 world champion played a pivotal role in developing the latest version of the RC213V and brand new RCV1000R customer bike.

But according to reports in British Motorcycle News (click here for complete report), planned tests for Stoner in Japan are yet to be confirmed for this year.

“We are still speaking but it is not sure if we will go ahead,” said HRC team principal Livio Suppo. “My feeling is that Casey really wants to take a sabbatical year where he won’t have any commitments.

“I totally respect this and my feeling is if we do something it will be less than last year.”

HRC vice-president Shuhei Nakamoto also told MCN that Stoner will unlikely be part of the testing program this year.

“He said he wants to do nothing this year,” Nakamoto said. “Casey is Casey, so you never know.”

Stoner spent 2013 splitting his time between a Red Bull Racing Australia drive in the V8 Supercar Dunlop Series, as well as a series of private tests for Honda in Japan.