Team Honda Racing’s Josh Hook set the fastest time in last week’s Australian Superbike test at Phillip Island. CycleOnline.com.au today caught up with Hook to find out how the Honda CBR1000RR SP is and more as the 21-year old prepares for his assault on this weekend’s opening round of the Phillip Island Championship.

Josh, thanks for taking the time out today to talk to CycleOnline.

No dramas at all, any time.

How is the new Honda CBR1000RR SP? Sum your experience from last week’s testing.

As you know we didn’t change much, we pretty much just took the bike straight out of the box and went down to Phillip Island to the test, but we ran our Superbike engine in it from last year. But the way the chassis works with the suspension and stuff is just unreal!

We didn’t change much at all really to be competitive on the bike. We pretty much matched our fastest time from last year last week at the test, so I’m pretty stoked with that. The bike is definitely working really well.

Team Honda Racing has really adapted well to the motorcycle fairly well as well. I think we will be able to make some solid changes to the bike and make big step forwards, so I’m looking forward to it. 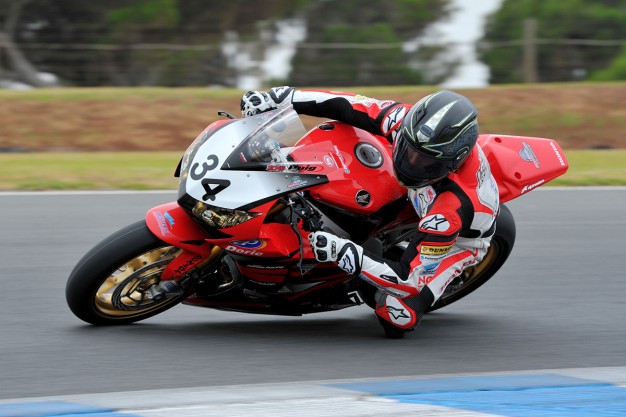 Obviously the SP has the Öhlins suspension front and rear and the Brembo brakes. They have also found a bit more power elsewhere inside the engine, but I have not tested the standard motorcycle yet so I wouldn’t know.

Definitely the chassis and the suspension is a big improvement from last year’s Honda CBR1000RR race bike. The bike is simply an unreal package straight out of the box, which I was quite surprised. I was really surprised on good the bike was. As I said we made a few clicks to the standard suspension and we were doing 32s, so it’s a really good package.

You were running Pirelli tyres last week. Were they hard to adapt to compare to the Dunlops?

Not really – I have ridden on Pirellis before. Both Pirelli and Dunlop have a reasonable amount of grip, so between the two tyres there is not a massive change. For me I just went out there and it was a long time since I last rode a motorcycle.

So it was hard to tell a massive change in tyres because it’s been a few months since I was last on the bike. I just went out there and rode the thing. But as you know we’re running Pirelli tyres for the Phillip Island Championship this weekend and then going back to the Dunlop control tyres for the Australasian Superbike Championship.

Talking about the Australasian Superbike Championship, everyone knows by now Team Honda Racing is turning its attention to that. What is it going to be like doing six races over one weekend, compared to just the two races you were used to in ASBK?

I don’t really know what the format is going to be. I’m really fussed on how the series is put together, being a six-race weekend. Really we’re going there because we think that is the step forward for Australian Superbike racing. It is definitely going to be good because there is going to be a lot more competition.

We have the best riders in Australia all in one place, which we haven’t had in a few years now, so it’s definitely a step forward. We will just have to run with it and see how we go.

Will fitness come into a fact being a six-race weekend at all? Having three races one day, then backing it up the next day with another three…

Yeah for sure, fitness always comes into racing. The races may only be short, but they’re going to be short and a serious dog fight! They’re going to be hard work, that’s for sure. It’s going to be a sprint race and it’s important to just to get out of the gate fast and put your head down and go for it. And trying not to lack in any areas.

The fitter you are the easier it is going to come. We are doing as much training as we can to be mentally and physically fit for the year ahead. The season is shaping up to be a good year, that’s for sure. I can’t wait! 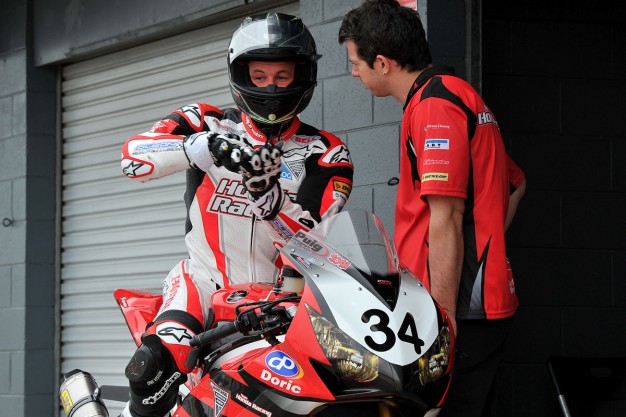 Having Wayne Maxwell back in the stable for 2014. What is it like having his company again?

I guess it’s like going back to the old days where we had the ‘A’ team, I suppose. But he’s good, he’s good value and we all get along which is a massive bonus. To get along with all your teammates is definitely a plus. So I can imagine how hard it would be if we didn’t get along.

Both Jamie [Stauffer] and Wayne are good guys and we get along really well. We have a laugh and have fun, which is the most important thing. On the race track it’s every man for himself. We are all in it to win it, and we don’t let team-ship or friendship get in the way there at all.

So we will all be going for it, but we all get along really well off track. So we’re all in for a good year.

Having three riders in the team, is there any added pressure which comes from your end of the garage? Do you have to deliver the goods this year and take the title fight to both Wayne and Jamie this year?

For sure. I entered this championship with high hopes to win it – I’m not going there to lose. I want to walk away with the Australian Superbike Championship. I’m not the rookie anymore, so I guess there is bit more pressure there for me.

But for me, especially coming off the test last week, I feel fairly strong and we have a good direction with the motorcycle and Team Honda Racing is working really hard with us. It’s going to be really good. But this year, I’ll definitely be going for the win and try and win the championship. So there is a bit of pressure but there, but it’s nothing out of the usual.

I’m going to get you to do a bit of ‘crystal-balling’ now. This weekend at Phillip Island… Can you win?

I think I can. As you from being down at the test last Thursday and Friday, we were half a second faster than anyone else in the field, so that’s a massive confidence boost for me. So I’m feeling good going into this weekend. We’re just going to have to go down there this weekend and get the job done. But for sure I’m racing for the win.

Thanks very much for your time, all the best of luck this weekend!