Team Honda Racing’s Jamie Stauffer was the overall winner in a mixed weekend for the factory Honda outfit at Phillip Island. After finishing second in race one the former dual Australian Superbike Champion cruised to the race two win, after teammates Josh Hook and Wayne Maxwell crashed out of the running on lap one.

The 34-year-old had mixed emotions following his first win of the season, on debut aboard the CBR1000RR SP; happy to win, but just as concerned for his teammates’ health after a frightening fall.

CycleOnline.com.au spoke to Stauffer about the weekend to get his take on round one of the Phillip Island Championship alongside the World Superbikes. 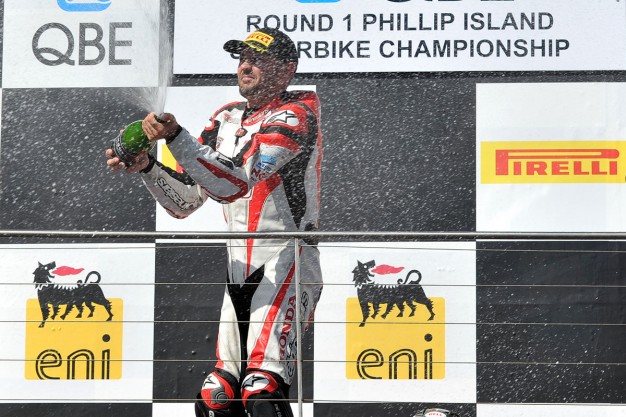 First of all Jamie, well done on the win this weekend. Can you sum it up from your point of view on how that final race was for you?

Thanks for that. Well for the Team Honda Racing it was not very good at all. We now have two teammates busted up in the medical centre and both of them have pretty good injuries. Wayne was to supposed to fly out to Europe on Sunday night. So yeah, it was a bit of a shame.

I didn’t actually know what happened until I went down the main straight for the first time, I had a look at the big screen and saw someone off at somewhere, but I didn’t know who it was until I came around the next lap I seen one bike and I worked out it was both of them.

It was a good weekend for Team Honda Racing apart from that though and we were pretty dominant. Once I knew those guys were out, I just kept a 3-4 second gap the whole race and didn’t worry about pushing it too hard. It was good to get the overall win, but as I said hopefully the boys are feeling better soon.

Apart from the drama in that last race, have you found any more improvements with the new Honda CBR1000RR SP from this weekend?

I think so. It’s hard to tell because the track was quite slippery, which I think might have caught Hooky out. But once Josh and Wayne were out I just decided to take it easy and finish the race. We already had two bikes out, we didn’t need another one.

So I just rode around and kept a gap. But the Honda CBR1000RR SP is pretty good – we have few more things to try out. All in all, we’re pretty happy with the direction that were headed. 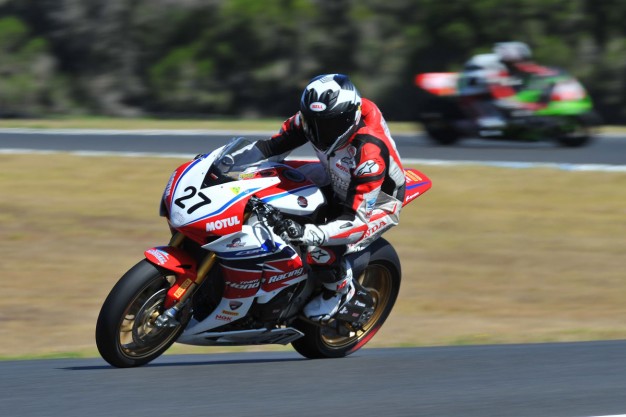 Next time we will see you will be at round one of the Swann Insurance Australasian Superbike Championship at Wakefield Park in March, will it?

I guess so, we will get out there. Of course the bikes will be a little bit different for this championship, so we’ll get out there and see how we go.

Will you and Team Honda be doing any testing between now and then?

I’m not sure yet. Everything just happened a bit quick.

So from what from you and the team have learnt over last weekend, is it going to make the first round at Wakefield just that little bit easier?

Everything is working well with the bike today, the Pirelli tyres worked really well for us all this weekend and the whole team are just working great. So we will see how we go in a few weeks from now.

Thanks for your time Jamie, look forward to seeing how you go at the first round of the ASC.