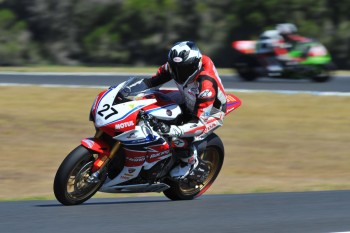 Around half of the field of Superbike riders across the weekend chose to race on Pirelli tyres, with many privateer racers choosing Diablo Superbike combination.

It was a strong result for Pirelli alongside the WSBK series, which features a Pirelli control tyre.

In race one Team Honda Racing’s Josh Hook won in his domestic Superbike debut on the Diablo Superbike tyres, but was later injured in a race two incident while in contention for victory. Stauffer’s overall came by virtue of 2-1 finishes.

“We were pleased to see so many local riders choose Pirelli to race Phillip Island this weekend,” Don Nicholas, Pirelli product manager at Link International. “We learn more each year that we race here, and work closely with the Pirelli riders through the weekend to get the best results we can.

“We’re fortunate also to be able to rely on the Pirelli Racing Department and their World Superbike Championship tyre development at Phillip Island as the world championship returns each year to Australia, to further improve riders perfromnace the the Phillip Island Circuit.

“We congratulate all Pirelli riders for their results and efforts throughout the weekend, and look forward to the season ahead.”

Team Honda Racing principal Paul Free was ultimately very satisfied with the result following the team’s decision to contest the event on Pirelli.

“One thing that was very positive and consistent was the Pirelli tyres that we were using, the level of grip and confidence that the tyres gave our riders right from our first test was just amazing,” Free reflected.

“This was the first race for our team on the new CBR1000RR SP and the first time that we had used the new generation Pirelli tyres on our Honda and to come away from this event with race wins was fantastic for all involved.”

For the Superbike class, the Diablo Superbike SC2 front was most popular choice as also used in WSBK, in combination with either standard SC1 or SCX 1255 and 1633 rear 200/60R-17 rear tyres specific for Phillip Island.

These same Diablo Supercorsa SC1 tyres were used as part of the World Supersport range for the weekend, and are available at Pirelli stockists Australia-wide for local racers throughout 2014.