Compared to his rivals, Condon is a relative newcomer to the sport, but that fact makes him no less of a threat to the ever-expanding, quality field.

Though he’s been on two wheels since he could walk, Condon’s focus was always one hundred percent motocross. It wasn’t until the age of 21 that a chance opportunity to pilot a road bike ignited a passion that burns brighter each day.

His father, a co-owner of the family Bikebiz business, may not have ridden at all but was instrumental in opening the door to the sport.

“Dad had a couple of bikes sitting around, and it was more of a birthday present just for a one-off round – I’d never ridden them prior to that,” Condon explained to CycleOnline.com.au. “I was 21 years of age when I took on road racing for the first time.” 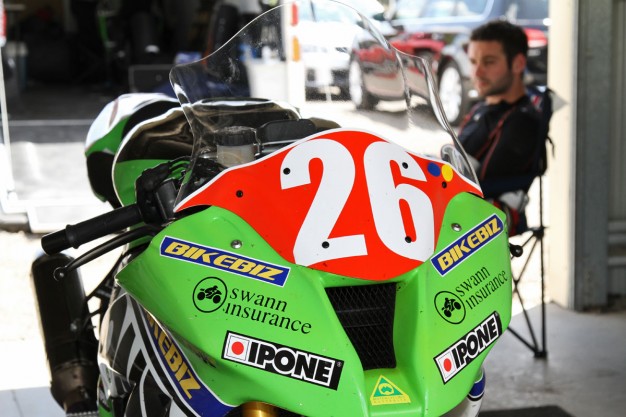 There were no half measures in Condon’s first experience on tarmac, stepping straight into national level competition within the Formula Xtreme series.

“My first race was Formula Xtreme in 2010,” reflected Condon. “Previous to that I didn’t even throw a leg over a road bike. It was all-new but I found I adapted to it very well. I was competitive pretty much straight away.”

With two race meetings under his belt on an older-spec machine, the family made the decision to upgrade to the then-current Kawasaki ZX-6, with Condon a consistent runner in the top 10.

The decision was made to move to a new Yamaha R6 for the 2011 season, one that would prove fruitful for the rider that was raising many eyebrows throughout the paddock.

In just his second year of competition, Condon found himself in a back-and-forth battle with esteemed World Supersport combatant Kevin Curtain, finishing second behind the veteran rider in what was undoubtedly a breakthrough year.

“Finishing second to Kev was definitely a highlight. I was able to win a few races here and it was a good follow-up year from 2010.”

The Curtain/Condon battle would kick off again in 2012, and though Condon would finish runner-up once more, the result was a motivating factor in his move to 1000cc competition in 2013.

“It came down to the last race and I only missed out on the championship to Kevin by a couple of points,” he said. “It was another successful year though with race wins, and a few lap records along the way.”

Condon opted for a Ninja again for 2013 and early testing form had him buoyant ahead of the first meeting of the year at the Phillip Island World Superbike event. His run of luck came to an abrupt halt prior to competition, with a significant crash and subsequent shoulder surgery sending him to the sidelines for close to half a season.

His return to racing was a stellar one, winning his first race back in the Australian Superbike Championship (ASBK) Prostock ranks at Queensland Raceway. 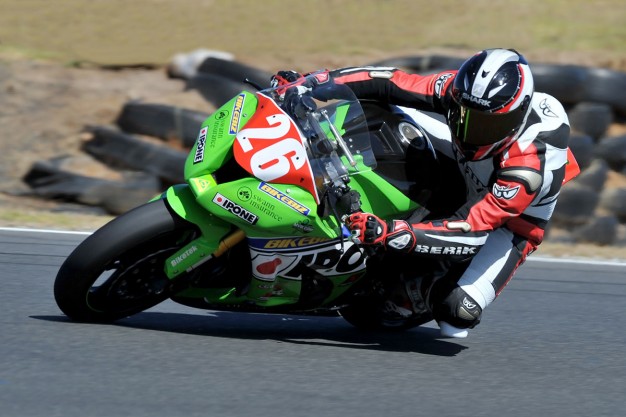 “It was a good comeback – I got a race win and a lap record there, but the weekend didn’t turn out as we wanted with a crash and then a clutch failure,” Condon continued.

Condon was a consistent top three challenger across the remaining races and bagged a number of race wins, setting up a promising 2014 assault which began in impressive form at Phillip Island last weekend.

He snared Prostock class wins in both races, and troubled seasoned Superbike riders in the combined class race.

“We found pretty much the perfect setting straight away,” he said. “In the first race I won Prostock there, and I think I was fifth overall. The only downfall for that weekend for me was the tyre – I was the only one up the front there on Dunlop.

“In the first race after two laps the tyre was blistered quite severely in the sidewall. I just had to sort of settle for that result. Race two was pretty much the same with the tyre problem, but I still managed to finish first in Prostock. I ended up bettering my own lap record from last year there as well.”

Condon was one of a host of riders who made the trip to Goulburn’s Wakefield Park earlier this week to contest the official Swann Series pre-season test.

Second on unofficial times only to multiple ASBK champion Glenn Allerton, the likeable rider has made his intentions clear for a debut season in the Superbike class.

“Definitely with the level of riders we’ve got coming in, to win would be an absolute dream come true,” he said of his title hopes. “Realistically, top three, to even top five, would be a very good achievement considering the guys you are up against.

“But we’ll take it round by round and hopefully, towards the end of the year, we’ll be fighting for a top spot.”

His first outing will be the highly-anticipated opening round of the Swann Series at Wakefield Park on 14-16 March.