Australian reflects on his World Supersport wildcard at Phillip Island.

After a superb 16th place finish in last weekend’s opening round of the eni World Supersport Championship at Phillip Island, Oz Wildcard Racing’s Ryan Taylor reflected on the weekend and gave his thoughts to CycleOnline.com.au about the whole experience.

Well Ryan, four days after a massive weekend at Phillip Island, have you recovered yet?

Yeah, I have. It’s been a massive few weeks with the testing we did on the Thursday and Friday before the official WSS pre-season test, which was on the Monday and Tuesday. Then of course the race weekend itself was a big one too. But I have recovered and now back at work at Powerhouse Motorcycles in Pakenham.

So how was your weekend all in all? Explain just what challenges you had to overcome to find your feet with a complete different package which you were not used to.

The whole weekend was a blast you know. We knew we were going to be up against it, but myself and the Oz Wildcard Racing Team went into the weekend with a positive feeling after two successful days testing on the Monday and Tuesday.

The weekend taught us a lot about bike settings and of course the electronics which of course I have not been used to in past. But with the great support from Wayne Howe from Rider Logic we came along way with the electronic side of things. So for myself the biggest learning curve was the electronics for sure.

On the race side of things, I’m wrapped to have come home to finish for team as they have worked so hard and did a fantastic job all weekend and supplied me a Yamaha R6 that was so great to ride. I can’t thank them enough for all the support! 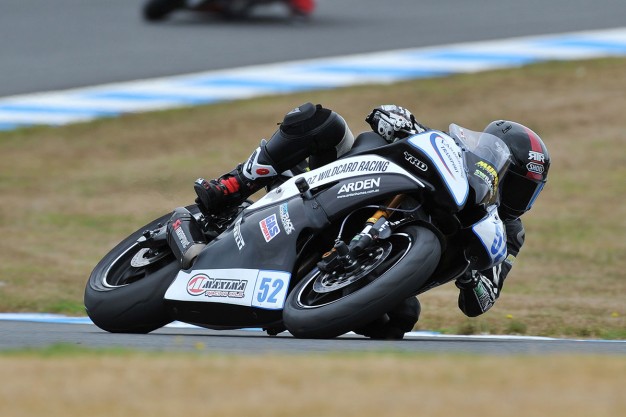 Most of us will probably never get to find out the real feeling of lining up on the grid for a world championship round. So describe the thoughts and feeling that was running through your head when you sitting on that grid last Sunday afternoon waiting for the lights to go out. Were there any nerves?

Yeah, of course there were nerves. But it was good nerves that help put you in the ‘zone’ I guess. You know you have something that you have to go and do, and you have to get it done.

So I guess the most nervous part was just waiting there on the grid for so long and your waiting for the grid to clear so you can go off and do your own thing. Once the grid was cleared and it was just myself, that’s when the nerves started to settle a bit as I could focus 100 percent on the race.

You were the only Aussie rider to finish the World Supersport race; Bryan Staring DNF because of clutch problems and Billy McConnell crashed out. It must mean a lot to you personally to have been the sole Australian to finish.

For sure. It’s a real shame what happened to Bryan and Billy, but that’s racing. To come home in 16th and to finish is a great feeling. But for me personally it’s great to repay the team back with a finish as the look on their faces when I returned back into the pits was amazing. They have worked so hard for this, and without all of them I would not be here for sure.

So what was the most exciting part of the race for you?

It had to be the lap when I came around saw 14th position on the pit board. I was like ‘wow, we’re in for two points here’… that was pretty cool.

And the hardest part of the race was?

Probably that first lap when everyone is bunched up and everyone is going everywhere. I was like ‘where are they going, what are they going to do’ and so on. I got pushed out wide by a few people coming into turn four on the opening lap, which left me dead last and that was not good.

After last weekend, what have you learnt in regards to set up that you can now apply to your ASC season that kicks off in a few weeks time?

The development of the motor-wise, suspension, and the data we found last weekend has just been amazing. Every session we went out in we just moved in leap and bounds ahead. We got faster, faster and faster in every session as we played around with settings to find the right balance.

Once again, the Oz Wildcard Racing Team worked wonders! So were looking forward to the FX-season that’s for sure. We will have a good package and be ready to go. 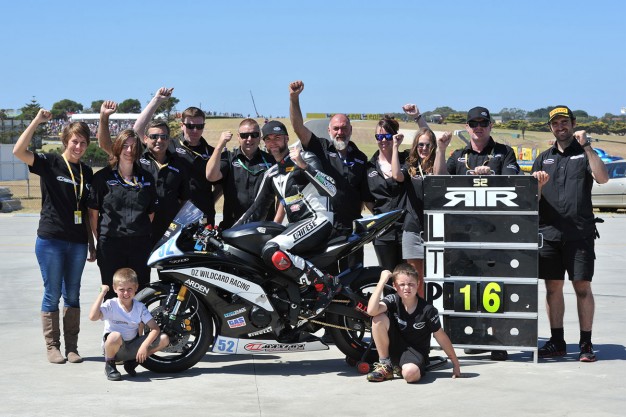 As you said before, your team has been right behind you and given some great support for this wildcard ride. Who’s in your team that have made this possible?

Yeah, there been a few that have helped me all the way that’s for sure. Stewart Winton, who has been the mastermind behind the whole idea of Oz Wildcard Racing. Stewart’s wife Janice, who has been the team’s coordinator/admin. Then there is Wayne Howe from Rider Logic who has helped us flat out with the data logging.

Sam Costanzo from Landbridge Transport supplied the Yamaha R6 and the financial funds to do this. Stephanie Redman from Mask Imagery designed and made all the team shirts. Steve Thibou from Mototrack Accessories did all the imagery (team posters, bike stickers, pit garage walls), which looked fantastic.

Then all mechanics that included dad [Peter Taylor], Alastair Reid, and Frank De Marco. And of course my girlfriend, Hollie Smith, who has been right behind me and given me great support. I can’t thank all my family and friends enough to for their support as well!

And what about your sponsors, they have helped a lot to. Who would you like to thank?

Ryan, thanks heaps for your time, once again well done on a great effort on the weekend and we look forward to seeing how you go this year in the Formula Oz class for 2014.

No worries at all, thank you.