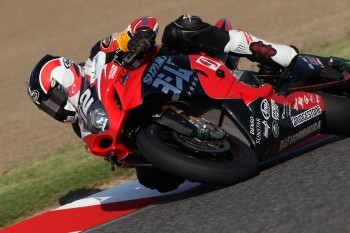 Australian Josh Waters has been confirmed for Yoshimura Suzuki at the 2014 Suzuka 8 Hours in Japan as the brand celebrates its 60th Anniversary.

Waters will partner All Japan Superbike rider Takuya Tsuda in the Yoshimura Shell Advance Suzuki team, which finished runner up last year. The event marks Waters’ return to Yoshimura after staring in 2012.

“I am very excited to be joining Yoshimura Suzuki Shell Advance for this Suzuka 8-Hour race – some of my best racing memories have been at Suzuka and with Yoshimura Suzuki,” Waters said.

“My teammate Takuya is very fast and we have a great team behind us, so we are going to be one of the strongest teams this year. Yoshimura Suzuki every year at the Suzuka 8 hour has been fighting for the victory, so this year we will try even harder to achieve the best result as it is a very special year for the team and I feel very lucky to be a part of it.”

As part of its celebrations, Yoshimura will field a second entry in 2014, the Yoshimura Legends squad headlined by 1993 500cc World Champion Kevin Schwantz alongside former Japanese champion Satoshi Tsujimoto.

Schwantz finished a fine third upon return to racing at last year’s 8 Hour as part of Team Kagayama aboard a GSX-R1000. He and Tsujimoto were partners at the event way back in 1986.

“Pops was a very influential man in my career. I first met him mid-way through the 1985 season riding for Yoshimura. Riding for Pops taught me a lot and helped groom me to be the competitor that I am. He was a real motivator and got the best out of everyone that worked around him.

“In 1994, I presented Pops with my winning Suzuka Grand Prix trophy – the fourth Japanese win of my career – in the Suzuki garage. That photo is still one of my favourites of all time. Before his passing, he told me I was his only rider to ever win a 500cc World Championship, or as it is known today MotoGP, and since his passing his words still hold true.

“To be teamed with my teammate from 1986, Satoshi Tsujimoto, is a real honour. Thank you to the Suzuka circuit and everybody at Yoshimura Japan for the opportunity.”

The prestigious event will take place at the Suzuka Circuit in Japan on 27 July.