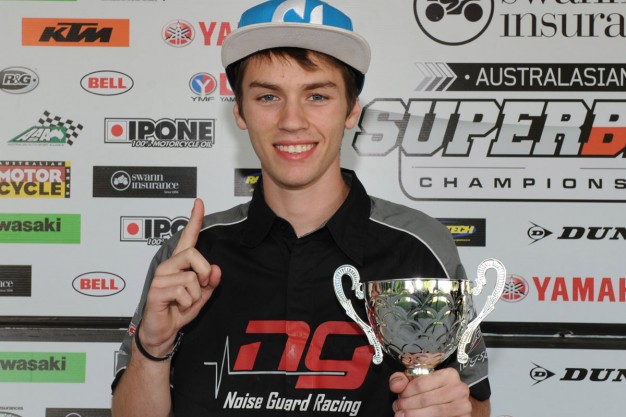 Bring us up to speed on the preparation for this championship. You’re not only sorting out and building a bike but also involved in sourcing sponsors for the year, no doubt making it a busy pre-season?

It was a pretty intense pre-season. It sort of all came together last minute, and we got most of the parts organised a few weeks before our test, as well as getting the bike painted and stickered up.

It was all pretty rushed, those last few weeks, but we were pretty confident we could get a pretty good result coming off last year. We were hoping that it was going to be as successful as last year and it turned out to be just that, and a bit more.

The format for this championship is a little different, with the racing taking place for the FX series on Saturday ahead of the ASC races on Sunday. Obviously those races on Saturday have a big bearing on the following day, can you talk us through them?

Saturday was a good day. It let us suss out the competition and see where everyone was going to be at. It was awesome getting the pole for Sunday with the fastest lap time there, it was a little bit off our pace because the weather wasn’t exactly right, but I was pretty happy with the lap time and I was happy to start on pole for the first race on Sunday.

It was good as it gave me a big boost of confidence. The qualifying is a little weird, and I’m still trying to get my head around it, but it seems to work really well. I like how it’s a progressive grid. One mistake during the race can affect your next one and vice versa, having a good race can make your next grid start better.

Let’s walk through Sunday’s races, starting with race one…

Yeah, it was good to start from pole with that lap time from Saturday. My plan for the race was to get out there and try to set a consistent pace and basically try to take the race down to the last lap. I knew I had the horsepower to slipstream Kyle [Buckley] to the line.

I was pretty confident he was going to make a move in the last corner like he’d been doing all weekend. And that was exactly what happened, I slipstreamed him to the line and got a win.

A similar result in race two saw you pushed again by Buckley. Can you talk us through this one?

I sort of went in with the same plan again. But I wanted to go in there and set a good lap time to start with because there’d been a lot of problems with the red flag through the weekend.

On the last race of Saturday I got messed over a bit with the red flag and got relegated to second when I was leading, so my plan was go out and pull away early. But he closed up and it ended up going down to the line again. I got the result though, the win, so I was happy with that.

Again it looked like going down to the wire between yourself and Kyle for race three but a yellow flag on the final corner complex changed this.

Again it was sort of the same plan, to go out there and get that good start. I couldn’t drop Kyle this time though, there were a lot of problems with the wind across the circuit, which was really bad in the last race. For the last two laps there was a yellow flag on the second-last corner to mid-corner Turn 10, so I knew that was sort of his only opportunity to pass me.

I expected him to pass me there but thought he would have waited mid-corner to try to drive up the inside. He went a bit earlier and made the pass but it was under yellows, so I crossed second at the line but was able to take the win. Three from three, pole and the lap record was a pretty cool thing to achieve.

You mentioned the lap record there, obviously a good achievement to take away with you. What were your thoughts on your pace – was this quicker or perhaps not as quick as you’d expected to go?

In testing we were doing 10s, and I was very happy with that. I was kind of hoping to go faster, but I wasn’t expecting an eight this early, maybe more hoping for a bit later on. But that last lap charge where I was chasing down Kyle is where I was able to move forward with that pace and I was really happy to get the record. Hopefully next time we’re at Wakefield we’ll be doing sevens!

The Ninja Cup has been well supported, evident by the number of riders on the grid. Tell us your first impressions after round one. and how you feel it can work as a feeder category to the higher capacity production classes.

The class is awesome. It’s a little bit different this year with the modifications to the suspension that you can do, it definitely creates another factor in the championship. It means set up is really important and the rider’s that can get that right are going to have a good shot at getting a result on the day.

A lot of people got onto the 600s or even the 125s and were a bit confused as to what to do with the suspension, so it takes them a season to get used to it. But with this series, with the adjustable suspension, it definitely makes that step up a bit easier.

On the basis of Wakefield Park we can see that your primary rival for the title would have to be Kyle Buckley. Do you feel other riders will come into the mix as the series moves on?

It wasn’t really a surprise at the start of the season, I knew he would have pace. I was kind of hoping to get a bit of a jump on the competition with my experience on the smaller bike, but Kyle pushed me all weekend.

It was good as it pushed my lap times down and probably everyone’s, it worked out good. I think there are a few competitors that will be surprising us throughout the year. Bailey Perriton will be up near the front when we’re at Mallala I think, because it’s a track most of us haven’t ridden on.

And I think there will be a few other riders up there and maybe even some guest riders surprising us throughout the season.

Next up on the calendar is Mallala. Do you have any experience there or is this a completely new circuit?

I’ve never ridden at Mallala and don’t know the layout at all. I’ll probably be jumping on YouTube and looking at some videos of fast guys around there and getting an idea of what they’re doing to get in a good lap. That Friday practice session first up will be important to put that into practice and hopefully we can come away with similar success.

Before we wrap things up, we understand you’re packing your bags and jetting off to Malaysia this weekend. Give us a quick rundown on what you’ll be up to…

We’re flying out early Saturday morning, and will be out there for a week testing the bike at Johor with Chas and Hudson. My team’s got the track on Thursday, so we’ll be riding there and hopefully lining up a good ride for this year and possibly next year.