Lap of Champions to raise awareness and funding with boxing legend 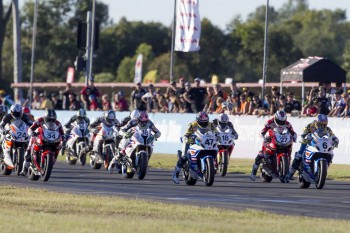 The 2014 Australian Superbike Championship, which will hold its season opener at Queensland Raceway on 5-6 April, will support the Danny Green Coward’s Punch campaign.

The new partnership will see the Australian Superbike Championship join forces with Green to implement a number of awareness raising initiatives in the hope of stamping out the cowardice act of gratuitous violence.

Group rides to Australian Superbike events in 2014 will be in support of the ‘Coward Punch’ campaign.

At the events motorcyclists will be invited to participate in a lunchtime ‘Lap of Champions’ which will not only raise awareness for the ‘Cowards Punch’ campaign but also funding.

The Australian Superbike Championship will donate $5.00 for each motorcyclist who participates in the ‘Lap of Champions’ at Queensland Raceway and Phillip Island.

Green and Australian Superbike Championship organisers IEG are encouraging motorcyclists to get behind the initiative and ride to Queensland Raceway on Sunday 6th April in support of the campaign.

“As a motorbike rider, I am proud to have partnered with the Australian Superbike Championship,” Green said. “I’ve had fantastic support in my boxing career from the superbike demographic and am thrilled that this support continues with my campaign.

“All funds raised towards this campaign from this initiative go towards raising awareness and spreading the word nationwide to make a shift in the culture and improve the way we treat each other and ultimately saving lives and making our community a safer place.”

NextGen Motorsports rider Glenn Allerton praised the new partnership and said he hoped the greater motorcycling community got behind the group ride initiative.

“This is a fantastic initiative and it is great that as a sport we can raise money and awareness for something that is affecting the whole community,” he said. “It is something that everyone can get involved with and the more people that get involved sends a powerful message to those who think dangerous behaviour is okay.

“Myself and some of the other Australian Superbike riders will lead the ‘Lap of Champions’ at Queensland Raceway and even if you don’t ride a motorcycle this is definitely something you don’t want to miss,” Allerton added.

This event and associated activities including group rides to Queensland Raceway on 6 April have been logged with the Police Commissioners Department to ensure riders enjoy a hassle-free ride to the track.