Find out more about one of Australia's fastest 600cc talents.

CycleOnline.com.au speaks with domestic 600 class standout Aiden Wagner to find out what makes the Queenslander tick ahead of the opening round of the Australian Superbike Championship at his home circuit in Ipswich. 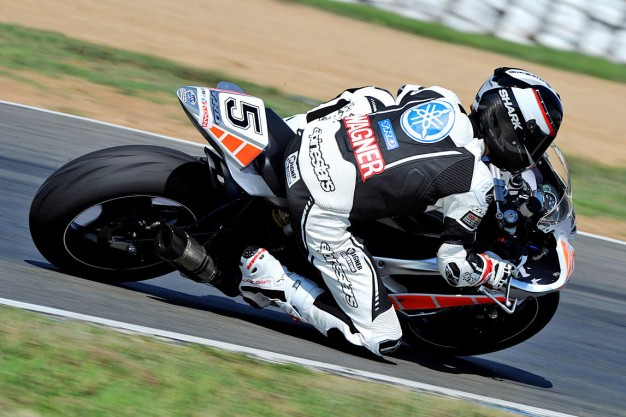 Greatest moment of your career?
It definitely would have been qualifying on pole for the 2013 MotoGP supports, and taking three from three race wins. That’s definitely my career highlight so far. The crowd was awesome and the team worked together unreal.

Toughest race ever?
They have all sort of got their tough bits. I’m not exactly sure what that would be, no race really stands out to me yet.

Long-term goal?
I definitely want to race a wildcard at the start of 2015 in World Supersport. I’m hoping to get my name cleared for a wildcard race so we can start developing a bike. I’d like to do that and hope to go as best I can, aiming for a top 10 finish. It’d just open a few people’s eyes I think.

Favourite track?
Phillip Island, for sure. I just love it, it’s so wide-open. It’s flat out, and you can really tell the difference between the guys who can’t hold it on and the guys who just want it so bad.

If you weren’t a racer, you would be?
I help out on the family farm at the moment, driving tractors and stuff. Also my dad has a company doing soil testing, so I help out there too, driving trucks around and servicing a bit of the equipment. Before I started road racing I also did my apprenticeship as a motor mechanic, and all I have left there to finish is a few small courses. So if I wasn’t racing I’d still have my hands on that side of things, but I’d really rather racing to be my job!

Arch-rival?
He’s not as such a rival, but me and Callum Spriggs have been racing together forever in motocross and now road racing. We’ve always been really close in terms of where we finish on the track and that’s carried over to road racing. It’s always close racing between us two and always good fun because we know each other’s strong and weak points, it’s really good to push hard against him.

Greatest inspiration?
That’s a tough question. I look up to a lot of GP and Superbike riders, and I try to take a bit from everyone I can. I read their books and try and learn a bit from each. No one in particular, though.

Superstitions?
I’m not superstitious about anything. The race will turn out how it’s going to turn out. If you just try to get your head in the right spot, and be really focused up to the event, and train hard, that’s all you can rely on. Focus and not letting anything distract you is best. I just concentrate all of my thoughts on the starting line and it goes from there.

Training methods?
I do a fair bit of motocross. We’ve got a track here at our property, so I’m riding all the time. Also cycling, running and gym – I have a trainer to try to keep lean and light, but also strong, to handle the bike around.

Non-bike related hobbies?
I like jet skiing, that’s one of my good hobbies. But also just driving tractors and diggers on the property. I’ve had a liking for that since I was little, growing up on the land, so I guess that stuck wit me.

What car do you drive?
Landcruiser ute.

Favourite magazine?
I like AMCN, and I read a lot of motocross magazines too, like Dirt Action.

What’s on the iPod?
I get into hard rock, and a bit of country. It’s a pretty wide range.

Favourite thing about racing in Australia?
It’s super competitive. Our class, the 600 in particular, but obviously now you have all of the top guys going head to head in Superbike, and all the factories there too.

Who will win the World Supers?
I’m hoping that [Tom] Sykes does.

And MotoGP?
Definitely [Marc] Marquez, but round one showed us that [Valentino] Rossi is up there too.

Longer, faster circuits or shorter, more technical circuits?
It doesn’t really worry me. If you’re racing there, then everyone’s in the same boat. The longer, faster circuits probably moreso though, because they sort the men out from the boys. The corners where you’re going 200km/h plus, and you’re just holding the thing open and it’s sliding, that’s a feeling you can’t get anywhere else.

Monster, Red Bull, Rockstar?
None, I don’t have any kind of that stuff.

McDonalds or KFC?
None!

600 or 1000?
A bit of both. I really enjoy the 600 at the moment, and enjoy the stuff on the world stage – the 600 Supersport. It’s unreal, and so close. Moto2 as well – the racing is really close. There’s a lot of guys around my age, just going for it. In the long run though, I’d definitely want to step up to the big bike.

MotoGP or World Superbikes?
A bit of both again. I like both. It’s hard to compare really.

Print or digital magazines?
Probably enjoy the magazine in print. We do a lot of flying and read magazines or a book on the plane, so I’d rather do that.