First results of Chinese collaboration have been revealed. 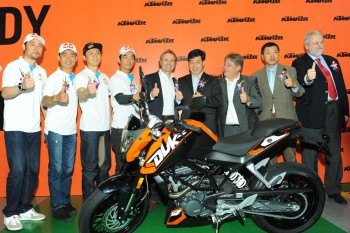 Following a partnership announcement in late 2013, CFMoto president Lai Guogui was joined by KTM’s Harald Ploedckinger and Hubert Trunkenpolz as the Dukes were rolled out at a product release ceremony to celebrate the occasion.

The partnership sees KTM 200 and 390 Dukes manufactured at the CFMoto plant for the largest motorcycle market in the world, China.

Lu Zhengjun, production director of two-wheelers for CFMoto China said the company were committed to taking on board some of the KTM ethos around staff training, quality control and production management when producing the KTM R2R bikes.

“The bikes definitely have KTM genes,” said Zhengjun. “CFMoto have been concentrating on design and manufacturing of high end, differentiated products for a number of years now and the opportunity to work together with KTM on these first models was a great experience for us.

“Our companies share many similarities such as culture, quality and product philosophy and the superb quality of these bikes is proof of that.”

The roll out of the first KTM R2R models from CFMoto is seen as a foundation move to allow for more collaboration between the two brands and more products to be rolled out in the future.

The 200 Duke and 390 Duke were launched with the help of the new KTM R2R Red Bull factory racing team.

For a full list of CFMoto products and to find dealers across Australia, visit www.cfmoto.com.au.

Meanwhile, CFMoto has officially launched its 2014 naked and touring bikes, the 650NK and 650TK. CFMoto’s 2014 models are now available to purchase at dealers across the nation. Prices start at just $7290 for the NK and $8790 for the TK ride away.