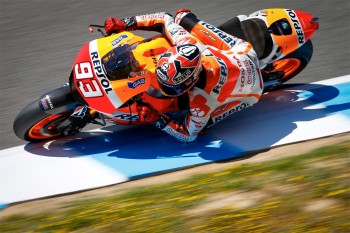 Repsol Honda’s MotoGP championship leader Marc Marquez was fastest in the post-race test at Jerez in Spain on Monday.

In the perfect morning conditions Marquez was amongst the first riders on track along with Alvaro Bautista (GO&FUN Honda Gresini) and Karel Abraham (Cardion AB Motoracing).

Marquez tried rear suspension tweaks to help with fast cornering and also worked on electronics and geometry settings. His teammate Dani Pedrosa was 0.64s behind him in fourth place overall having worked on front suspension to improve race performance in early laps.

Second on the timesheet was Jorge Lorenzo (Movistar Yamaha MotoGP) a 0.262s margin from the top with a late fast lap having worked on electronics and bike balance, also testing a new swingarm.

In third place was Valentino Rossi (+0.326s) who has recently incorporated a new chassis into his evolving Yamaha YZR-M1 package. Fifth fastest was the aforementioned Bautista (+0.898s), the Spaniard completing a marathon haul of 73 laps as he worked on front forks and rear shocks.

Bradl will visit a specialist in Germany on Tuesday with regard to the pain he is suffering in his arm.

Ducati Team’s test work was handled by Michele Pirro in the absence of Andrea Dovizioso and Cal Crutchlow, whilst Nicky Hayden (Drive M7 Aspar) was forced to miss the test due to a severely swollen wrist from Sunday’s race.

Colin Edwards (NGM Forward Racing) also missed the test, with his Moto2 colleague Simone Corsi taking over his duties as the Italian gathered some MotoGP experience.