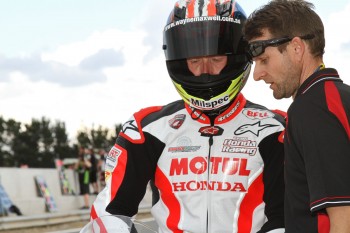 Team Motul Honda’s Wayne Maxwell will line up at this month’s Mallala round of the Swann Insurance Australasian Superbike Championship (ASC) in South Australia despite sustaining a fractured leg late last month.

However the 31-year-old was back aboard his Honda CBR1000RR SP at Mallala today in the first of two days testing, confirming he’ll contest the race weekend on 17-18 May. And following that, he’ll undergo further medical examinations.

“We didn’t ride much at the start, because the track was wet and the conditions were a bit dicey so I didn’t really want to go out,” Maxwell told CycleOnline. “But I ended up going out, my leg and wrist were hurting, but not too bad on track.

“There’s a crack in my fibula and in my heel, so it’s just a matter of evaluating the injuries further once we get Mallala out of the way.”

Next Gen Motorsports BMW’s Glenn Allerton sat out today’s tests after undergoing double knee surgery in April. He’s yet to confirm his participation on the race weekend.

It’s understood championship leader Jamie Stauffer was fastest on Tuesday at the test unofficially. Stay tuned for a complete rundown from the test upon conclusion on Wednesday afternoon. 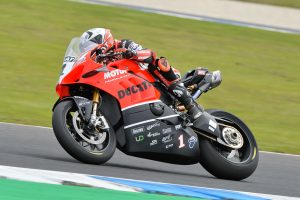