Aussie battler climbs onto the top step at Oulton Park. 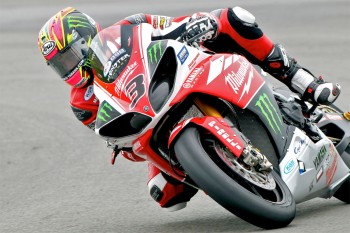 Australian Josh Brookes is celebrating a breakthrough win for Milwaukee Yamaha in the British Superbike Championship after dicing his way to the race two victory at Oulton Park on Monday.

Brookes made the bold gamble in switching from Tyco Suzuki to the YZF-R1 for 2014, a move which has already been a strong one as he and former champion Shane Byrne duke it out for the title in the season’s early stages.

Brookes scored second in the first race, setting a new track lap record in the process, which secured him pole position for race two before he went on to take the victory.

He was back and more determined than ever for the second race and dominated completely. Despite an effort by Byrne to take the race back it was Brookes who took his first win for Milwaukee Yamaha and move into second in the standings.

“It is a great feeling to win and what we all push so hard to achieve, so to get it is quite rewarding but it was so difficult,” Brookes commented. “There is always a dog fight in BSB to get to the result so I tried not to make mistakes and set my pace quite strong and consistent.

“In the early laps Shane got passed me and I thought I can’t let him get into that robotic stage where he is in the zone so I pulled a really cool, aggressive move to get back ahead.

“I had some really big slides and moments at the end of the race and I thought come on let’s just keep it all together and bring it home so I was really pleased to finally see that chequered flag waving.”

Brookes is now second in the standings despite crashing out of race one at Brands Hatch’s season opener, 30 points in arrears of the ever-consistent Byrne.