BCperformance A1 Kawasaki’s Kyle Buckley emerged as the new Kawasaki Insurances FX 300 Ninja Cup series leader on Sunday following a clean-sweep at Mallala in South Australia. CycleOnline.com.au spoke to him post-race for his rundown on the event. 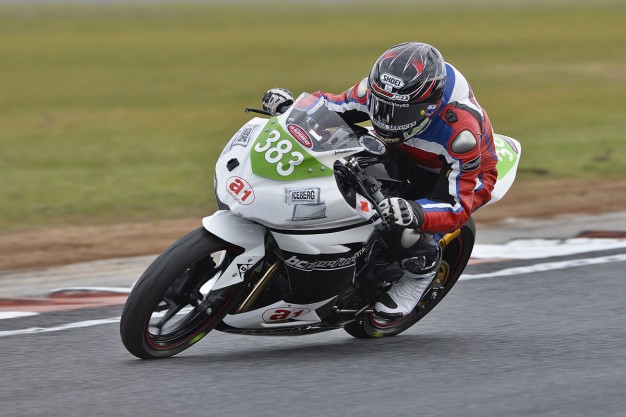 Leading into the weekend did you believe this event could be as successful as it eventually turned out to be for you?

To be honest I wasn’t overly confident, I thought it’d be pretty similar to Wakefield. I knew it wasn’t impossible though as we came down a week beforehand for a test. We got it going pretty well. The bike was doing what I wanted before the meeting which was good. I knew there’d be some fast guys so I guess I was just hanging out to see how I’d go.

How does the championship format, with racing on both Saturday and Sunday, affect your lead-in considering the track is largely an unknown?

I’d probably rather practice myself. It’s not the greatest going straight into the races but I guess it’s good to have them because they don’t directly count to the Sunday championship. It just gives everyone an opportunity to get on the pace in race trim, especially if they haven’t had a chance to test. It’s good, I like the way it’s run in that sense.

And Saturday’s races hold a dual purpose, also determining the grid placings. You fared particularly well across the day with two wins, that must have given you a boost ahead of the primary championship?

Brandon [Demmery] beat me by like point zero something of a second to pole, which was a bit devastating, but it was a good result anyway. Even though it’s not 100 percent important, the Saturday races are a good indicator of what is going to happen on Sunday. It make me pretty confident for Sunday. To be able to win by a few seconds was a good boost, for sure.

Did you make many changes to the bike based upon what you learned on after Saturday’s races and how it performed as opposed to the previous day?

We did change a fair bit, suspension-wise, and got the bike steering a fair bit better. We got it to hook up a bit more, because, as funny as it sounds, I was getting a bit of wheelspin or chatter from the rears. We got that sorted, and changed a few things, I probably shouldn’t go into too much detail! But we got the bike working better, and that was good. 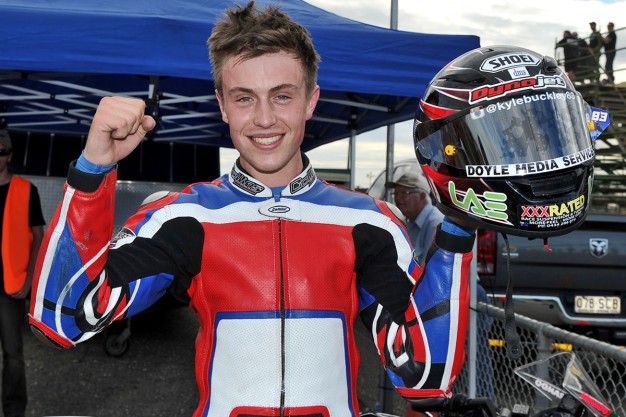 Talk us through Sundays races. You managed to take all three wins which is the ultimate outcome isn’t it?

Race one was good. Myself and Andy Lawson broke away from the pack a bit there, I think we had maybe two or three seconds gap. But then Andy made a bit of a mistake on the back straight. He went out onto the grass and lost the front, and his bike sort of fell onto mine while we were still flat out. He went down, and I felt it on the back, I think his bike was hooked in my chain. I managed to keep it up-right though. It was unfortunate for Andy but I guess those things happen. Paul Young tried to pull me in a bit and I think he got to about two seconds, but then the gap opened back up to about four seconds and I managed to hold on.

The second race was another good one and you kept that momentum for another win.

The last race was eventful. Brandon was right behind me for the whole race. On the last couple of laps we started dicing like mad and out-braking each other. To be honest it was the most enjoyable race of the weekend, being in that battle and having someone pushing me the whole time. We ended up getting down to the low 19s, which is a pretty decent time for Mallala, I’ve heard. That was a good race, and probably the most rewarding to get the win in.

Such a dominant showing at round two is now reflected on the championship ladder and now you’re in the lead. How does this set you up for the following rounds?

It was a good round and I pulled quite a few points back in to take over the lead of the championship. The next round should be good up in Queensland, which is my home track. I’ve ridden there since 2007 doing track days there, so I’ve got a bit of experience around there. I think the team will come up a couple of weeks beforehand and get a test in up there.

Thanks for the chat, Kyle. Congratulations.

No worries and can I also say thanks to BCperformance A1 Kawasaki and Doyle Media Services for their support this year.