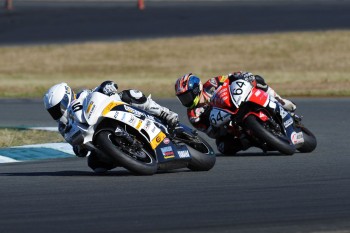 Race one of the Supersports was led by Morris for six laps, before Falzon finally took charge on lap seven and went on to win by 0.600s – setting the fastest lap of the race at 1m12.256s on his 10th and final lap.

Behind Falzon was Saturday winner Morris, who had almost eight seconds on Quinn as he maintained his podium form. Chris Quinn (Coopers Pale Ale Yamaha/Holmes Extractive Resources/YRD) held off top Queenslander in Wagner.

Another south Australian in Jay Presepio (Race Center Yamaha) snuck into the top five, with no less than nine YZF-R6s featuring inside the top 10.

Falzon backed up his victory in the second, which was a two-part race stopped at the halfway point. Quinn’s day came unstuck as he crashed out of third in the first part, unable to make the restart.

In the end Falzon crossed the line a full second in front of Morris, followed by Wagner, Mason Coote (Dynoverks Racing/MSC Safe Co/YRD Yamaha) and Presepio in fifth again.

The third leg was a thriller, resulting in a touch between Falzon and Morris on the final lap between turns four and five, but it was Falzon who got the nod from Morris by 0.060s.

“I had the lead into turn five, Daniel opened the throttle and hit me, and if that’s what he has to do to beat me, it shows what kind of guy he is,” a frustrated Morris said. “On Saturday we won and gained the lead for the championship today, so we will move forward from here.”

Falzon shrugged off Morris’ accusations in a controversial finish to the weekend that resulted in further arguments outside the JDR pit. Race officials also cleared Falzon of any wrongdoing after a Morris protest.

“Rubbin’s racing; it was all pretty clean though,” Falzon said. “I’m very happy with the win, the team’s been great this weekend and today was perfect for the team.”

Completing the podium was again Wagner, who was comfortably clear of Presepio and Luke Mitchell (JNL Racing/Maxima Racing Oils Yamaha). Quinn was again a non-finisher after exiting the track on the opening lap at turn four and entering the pits.

In the championship now it’s now Morris the leader on 195 points, just five points ahead of Falzon, and Wagner a further 10 in arrears. Spriggs has dropped to fourth, now 63 from Morris.