Likeable Irishman Paul Byrne finally broke through for his maiden Formula Oz round win last weekend at the fourth round of the Swann Insurance Australasian Superbike Championship. F1 legend Jackie Stewart once said: “It’s always hard to get the first win out of the way, but once you do, race wins just seem to steam roll from there”. So now that Byrne has got his maiden win out of the way, let’s see what is in store for the remaining part of season 2014. CycleOnline.com.au was right there after the race to see what Byrne had to say. 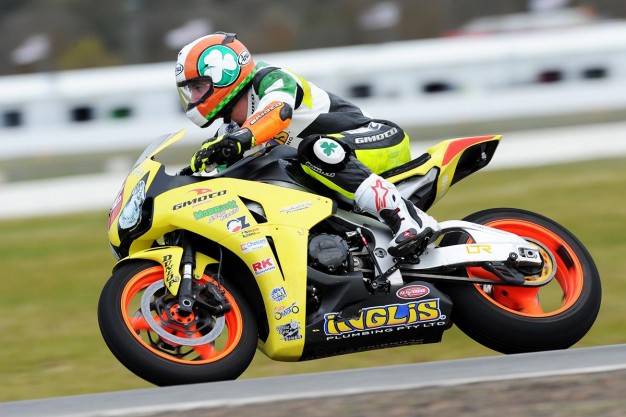 Well done Paul, fantastic job today. You have always been there, there abouts and have been at the pointy end of the field, but to come away with the round win you must be over the moon.

I’m really delighted to take the overall round win! We knew the Honda CBR would be strong at Winton. David Thomas and Peter Ward have done an awesome job this weekend setting the bike up, so it was really nice to repay them for their effort by taking first overall on LTR Honda. Hopefully we can carry some momentum to the next round at Wakefield and be fighting for the win again. Also a big thanks must go to Greg Inglis from Inglis Plumbing and Justin Brooks from 999 Group, Marriott’s Smash Repair and Oz Motorcycle Leathers. They have been a massive help this year in 2014.

In race three you seemed pretty happy to sit behind Brayden Carr when he got past you on lap five. Then you had another crack at the whip on the last lap, but in your mind were just happy to let him go for bit? Because it seemed like you more riding with your head in that final race, knowing that you had to bring it home on two wheels to win the round…

Yeah, at the beginning of the race, I felt as if I was riding with my head then. I think Brayden was making a few small mistakes and I was able to make some time on him in the last few laps. But I said to myself I would have a go on the last lap because I was really confident. But yeah it just didn’t work out, but I’m pretty happy with how it worked out overall.

Onto Wakefield Park in September for the next round. After finishing with a good result here today, you must carry a load of confidence going into that round.

Definitely, for Formula Oz we’ll be looking for a podium again there. So that’s the plan anyway. If we can get the Honda set up the way I like them, then the rest is up to me.

So what can you actually do to make them better, you think?

We’re actually riding our spare bike at the minute after I crashed the Formula Oz bike yesterday in race one and there is a bit too much damage done. It’s good for a spare bike but. 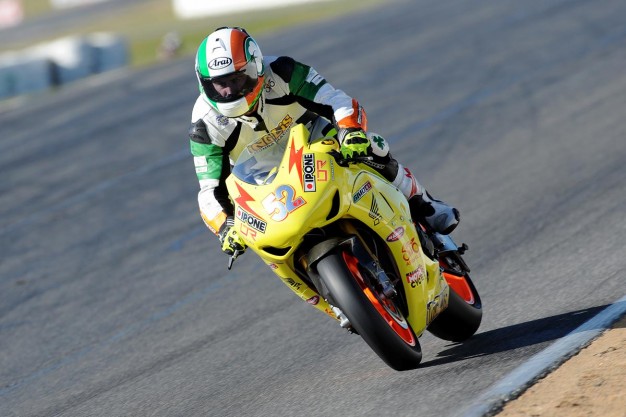 What is your spare bike like to ride compare to your normal race bike?

I haven’t done much mileage on the spare bike. In fact I’m actually favouring this bike now a bit more. We might try and work on it a bit harder between now and Wakefield.

Now this is the first win for yourself and the team since the passing of young Lachie Thomas. What is like emotionally to actually get this win?

You know, this is exactly what I wanted to be honest. The bike has been awesome and unreal, and the LTR Honda team have been right behind me and backing me with any decision I make. I really wanted to win today for Dave and Pete and, most of all, for Lachie.

Are you feeling quite emotional at the moment?

Yeah, a little bit funny you know. I was thinking about Lachie out there on the last lap because I knew I had the round win. I was like gee “this is a big weight of my shoulders!”

Fantastic! What is in stall for Paul Byrne between now and Wakefield Park?

Well, well done on your win today, hopefully you can do a repeat at Wakefield in September.

Thanks very much, cheers!