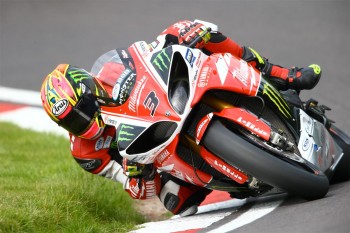 Ryuichi Kiyonari continued his ‘War for Four’ MCE Insurance British Superbike Championship titles at Oulton Park as he headed off the determined challenges of Josh Brookes to win the opening two races of the triple-header seventh round at Oulton Park. However the Australian retaliated with a victory in the final race.

Kiyonari had provided a stunning performance in the first race of the weekend (Saturday), charging through from the fourth row of the grid to take the win ahead of Brookes. In the second race (Sunday) the Buildbase BMW rider again overcame the challenge from the Australian to take his winning tally at the circuit to twelve races.

Speaking after the first race on Sunday, Kiyonari said: “That was very difficult because the conditions were changing from wet to dry, but I am very happy with the win. It is important for me to keep winning as I don’t want to be second now.”

Brookes was relentless in his quest for the race three win, which he scored in a commanding style at the Cheshire circuit. The Milwaukee Yamaha rider led from the start of the final contest to head off series leader Byrne, who maintained his run of podium finishes.

“I wanted that win badly. I wanted to get out to the front first and go for it because I thought I could then control the race,” Brookes said. “I wanted to give myself the best possible chance and that was what I did by taking the lead at the start.

“I didn’t know how hard to push to start with, but I decided and just kept focused. I didn’t know what was going to happen, but I knew I wanted to win!”

Quattro Plant Kawasaki’s Dan Linfoot continued his recent run of form by celebrating his first podium finish in the championship with a strong third place ahead of the determined Kiyonari.

Tyco Suzuki’s Josh Waters had one of his strongest showings this season, scoring 8-9-6 results across the three races during the weekend.

Alastair Seeley defied both the pain and the drying track to firmly put his Motorpoint British Supersport title bid back on track with a victory ahead of Glenn Irwin and Graeme Gowland, while Billy McConnell was fifth.