Change looks to be afoot in the Swann Series, with debate surrounding the series’ unique qualifying format put under the microscope this week.

Australian Road and Track Rider Promotions (ARTRP) general manager Terry O’Neill opened discussion on the topic on his own Facebook page, suggesting that while the format works in the majority of cases, it is leading some riders to manipulate their races to ensure they have a clear run in traffic and therefore a good shot at setting a lap capable of netting pole position.

Opinions have been drawn on the format to this point, with some racers relishing the chance to challenge for podiums and others admitting they place less emphasis on the result and more their qualifying chances ahead of Sunday’s races.

With only two rounds to run it could be that the series does indeed introduce a new qualifying format, with O’Neill eluding to a system that used Saturday’s overall round placings to set grid positions for Sunday.

As always the debates back and forth on the merits of the old system or introducing a new one have been both interesting and entertaining. A fair few of the top Superbike racers seem to be in favour of keeping the system as it stands, at least until the season is wrapped up. 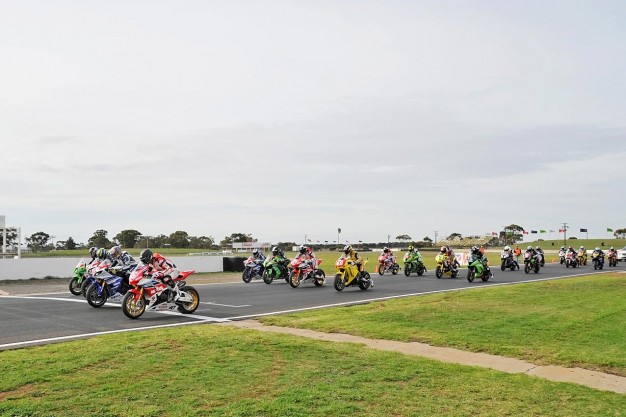 If the system is changed to O’Neill’s preferred format, then suddenly Saturday’s races will have a handful of extra weight, not to mention extra risk. A DNF in any race will directly affect round points and therefore grid position for each of Sunday’s races.

While we’re on the local scene, we’re still waiting with a lot of anticipation to hear of Motorcycling Australia’s plans for their Superbike venture in 2015.

Is a merger still on the cards? Will a private promoter be engaged? Will the rounds be promoted separately by clubs? These are just a few of the questions many would be keen to hear answers to.

In our Industry Insight with Paul Free he hints that his team will indeed be returning to the MA-sanctioned series as always intended, but is also waiting for more concrete confirmations. Watch this space…

Overseas now and after a considerable break we saw MotoGP fire back into life at Indianapolis, producing another entertaining race and yet again, another Marquez victory. That makes it win number 10, tying him with our own Mick Doohan, and now the question on everybody’s lips ahead of this weekend’s GP is, can he go one better and make it 11?

As his fortunes increase, surely so do the chances that his win streak will be broken. Who will be the one to do it or will he ride on, undefeated, to back-to-back titles? More murmurs in the grand prix paddock have Jack Miller on course to possibly join HRC in a factory role in MotoGP in 2015.

That would certainly be the most high-profile outcome for the Aussie but the rumours are gaining weight. What a leap that would be for Jack, another career-defining move without a doubt.

Until then he’s doing a fine job of building upon his advantage in Moto3, with a podium last weekend allowing him to sneak a few more points clear.

In the premier class Josh Brookes stood atop the winner’s dais, and Josh Waters achieved consistent top 10 placings in what is his best overall performance to date. Billy McConnell was also a winner in Supersport, rounding out a competitive weekend.

That’s it for this week. To stay up to date make sure you’re following our social media profiles; just search ‘CycleOnline’ on Facebook, Instagram and Twitter.