The landscape of production nakedbikes has come a long way in the last decade. No longer just softer, less aggressive versions of a brand’s superbike, many have become as highly-tuned and technologically advanced as their fully-faired siblings. Suzuki’s foray into the class with the GSX-S1000 in 2015 will be the Japanese manufacturer’s first superbike-derived nakedbike. Based around the legendary GSX-R1000, the GSX-S is bound to be a main contender for superiority in this hotly-contested market segment. Here – in no particular order – we look at the machines on the market today that the GSX-S has the unenviable task of fighting it out with on the tarmac and showroom floor. 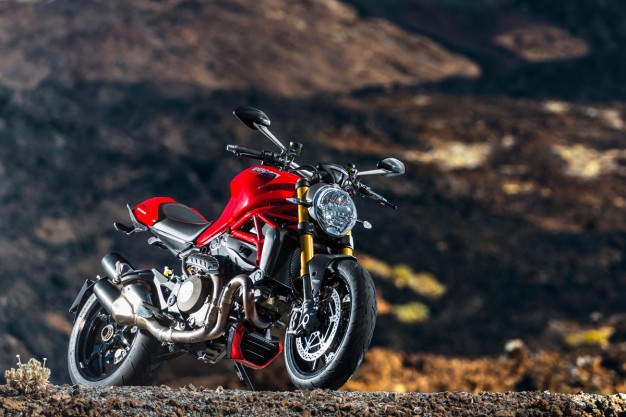 Ducati Monster 1200 S
The Monster carries Ducati’s previous 1198 Testastretta superbike engine and a lot of top-end work has been done to get the huge amount of torque available all useable. The chassis is where the biggest highlight of the package is as it borrows architecture and impeccable handling from the Panigale sportsbikes. And after the styling half-step into the previous Monster look that updated the original classic, this is the best finished and best looking Monster to date.

Aprilia Tuono V4 APRC ABS SE
This is a nakedbike packed with technologically advanced features and top-notch running gear. While its model name might be a mouthful, it’s only because it denotes that this is a limited edition model dripping in Ohlins suspension, carbon fibre and a tailpiece off the RSV4 superbike. The superbike-derived engine has a claimed 125kW and uses Aprilia’s APRC system that delivers traction, wheelie and launch control along with Race ABS and quickshifter.

Bimota DB9 Brivido
Running the same 11-degree Testastretta engine as the new Ducati Monster 1200 S, the Brivido is claimed to be lighter and more powerful by an extra 13kW, 4Nm and 8kg less! As always, the chassis and styling is the standout feature of the Bimota something that will no doubt be a match in its handling performance on the road.

BMW S 1000 R
In five short years, BMW has gone from unknown in the world of Superbikes to a force to be reckoned with. Successful on the track and in sales, BMW’s 1000cc four-cylinder superbike engine has found itself in the naked S1000R. Based heavily around the superbike, the R features all the good stuff off the RR like electronics and stonking engine, with a chassis and electronic package targeted for predominately road riding. Smart and sensible, yet wild and fun at the same time.

EBR 1190SX
Typically an Erik Buell motorcycle with fuel in the frame and rim-mounted ZTL front brake disc, the EBR 1190SX is a noticeable evolution of the Buell XB12S Lightning despite them coming out under a different name. With a 138kW V-twin engine, the SX is big on power and light on weight weighing in at 188kg fully fuelled. This is Buell’s best go yet at producing a nakedbike that’ll mix it with the best.

KTM 1290 Super Duke R
With mind-blowing power and torque, industry leading electronic aides, and a more refined evolution of chassis and running gear, KTM’s 1290 Superduke R is a class-leading machine. KTM has done a huge amount of development work on the latest version of their trusted LC/RC8 engine and built a machine that not only has the numbers to boast of on paper, but makes them all useable on the road and track too.

Kawasaki Z1000 ABS SE
The Z1000 is tailored to the road with strong torque and midrange from the 1043cc engine. The chassis is the highlight of this bike’s performance and would be more than capable of harnessing a few more ponies – something where the Z1000 lacks a little on the competition. But nevertheless it’s not something that more is needed of for most road riders. The cutting-edge, aggressive design is in direct contrast to this bike’s manner.

MV Agusta Brutale 1090RR Corsa
With better brakes, suspension and more powerful engine, the 1090RR Brutale stands out in MV’s three model line-up. Sharing the chassis and engine styling made famous 15 years ago on the F4 750 superbike, the Brutale is a no compromise nakedbike with wild, aggressive power and razor-sharp, nimble handling. The electronics are just what the Brutale needed to match it with the other bikes in this market segment.

Triumph Speed Triple R
Always known for its punch more so than its power, Triumph’s 1050cc triple has loads of midrange torque matched to an inebriating engine note. Raw in its appearance, yet wonderfully refined in operation and finish, the R version of the Speed Triple benefits from Ohlins suspension, Brembo Monoblocs and lightweight wheels.

Yamaha FZ-1N
Running the five-valve R1 engine from the pre-Big Bang days, the FZ1N has the oldest powerplant of this pack but that does nothing to take away from how good it is. Tuned for torque, the FZ engine is dialed in for the street and is economical while its chassis is plush and comfortable. In the light of the competition that surrounds it, you couldn’t help but think that a Big-Bang-engined nakedbike wouldn’t be too far away. We can only hope!