Australian on the pace during single-day Cadwell Park test. 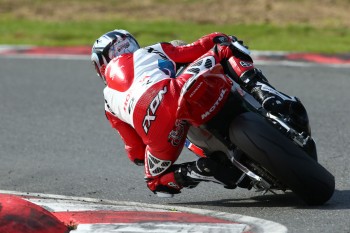 Honda Racing were back on track at their home circuit of Cadwell Park this week with Jason O’Halloran at the helm as the team continue their development program ahead of their return to the MCE Insurance British Superbike Championship.

Superstock title-contender O’Halloran got a second opportunity to test the Superbike following his appearance earlier in the season after the Knockhill event and the Australian believes the team are making positive steps forward with the Fireblade.

Testing in dry conditions at the Lincolnshire circuit, the team edged closer to the fastest lap set in last year’s race as they continue to build for their return.

O’Halloran said: “We had a good day at Cadwell Park and it was great to get out there before the next round. I did some laps on the Superstock bike before lunch and we got that spot on then we moved on to the Superbike. I spent the afternoon testing new parts and a new engine spec, and then we worked with a new shock and exhaust.

“We found some positives with the engine and the shock, it still needs a little more time, but it definitely has a lot of potential. My final run of the day was on a new SC1 tyre and I was about 0.3s-0.4s off the fastest lap from last year’s race so it was a mega end to the day.”

Honda Racing now look ahead to their next Superbike test following the Donington Park round with Julien Da Costa joining O’Halloran.