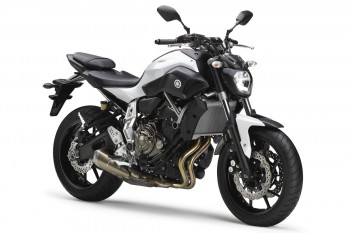 Yamaha is set to shake up the competition at the large-capacity end of the Learner Approved Motorcycle scheme (LAMs) market with the new MT-07.

Released in 2014, and available in most markets around the world, the 689cc parallel-twin MT-07 was too big for Australian learner licensing requirements.

So for the Australian market-only MT-07, Yamaha has built a 655cc engine to make the new machine LAMs approved.

Just like the 847cc MT-09 triple it closely resembles, the MT-07’s parallel-twin engine has a big emphasis on ‘combustion torque’. The 270-degree engine boasts an impressive 57.5Nm of torque and delivers its peak at 4000rpm. With a claimed wet weight of 179kg it’s bound to pack plenty of punch.

The chassis is unchanged from the ‘rest-of-the-world’s’ MT-07, a bike that has had rave reviews in this respect while changes to the engine capacity still promise to deliver a characteristically similar motorcycle. A 2mm smaller bore accounts for the 34cc difference in capacity, and while peak torque is down 10Nm, peak power is just shy of 39kW to bring it in line with licensing requirements.

Due on showroom floors in early September, the MT-07 will retail for $8999 plus on roads.