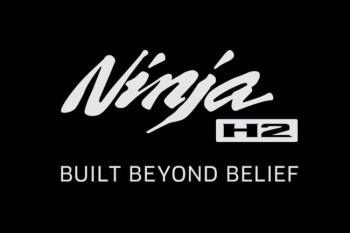 Kawasaki has announced that it will unveil a new supersport model dubbed the Ninja H2 in 28 days time at the Intermot show.

Releasing an initial teaser video at www.ninja-h2.com with the next installment due tomorrow night, the H2 is strongly tipped to feature the supercharged inline four-cylinder engine Kawasaki showed at the 2013 Tokyo Motor Show.

While Kawasaki didn’t go into any detail about the capacity or the engine’s future application on its release in Tokyo, the H2 model name denotes the legendary H2 Mach IV of the early 70s and its ground-breaking engine performance at the time. This is a seemingly perfect fit for a supercharged four-cylinder engine.

The H2 is set to be a true production model and not just a ‘show concept’ as the wording in Kawasaki’s releases indicates.

Kawasaki has a long history of production and technological advancement in turbines – essentially all that a supercharger is – and they have applied this experience in developing the first in-house supercharger produced by a motorcycle manufacturer.

With the countdown on to this year’s major motorcycle shows, you can only expect things to get more exciting from here on in!