Team Motul Honda’s Wayne Maxwell made it two Swann Insurance Australasian Superbike Championship wins in succession at Wakefield Park on Sunday, now carrying a 21-point lead in the standings with one round remaining. CycleOnline.com.au spoke to Maxwell about his winning form, despite undergoing surgery on a broken collarbone just weeks out from round five. 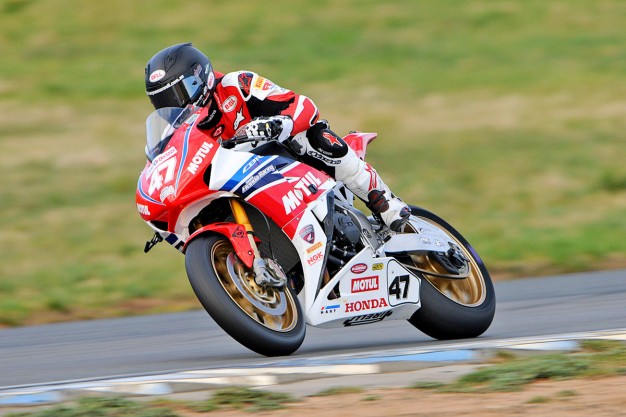 Well done on another win, your second consecutive after Winton and now Wakefield, which is really positive for the championship as well.

Yeah, thanks; It’s great to get another win under my belt. Three weeks ago when I busted my collarbone I wouldn’t have thought I’d come away with the round win – I was just going to try scavenge as many points as I could. To extend the championship lead is an awesome result.

On the bike how was the injury? From the sidelines and especially on the results sheet it didn’t look to affect you too much at all.

It was just a bit awkward – I couldn’t really be as aggressive or attack as much as I’d have liked to. At the end of the races I was a tiny bit fatigued, especially after six races, but I’m sure everybody was feeling the pinch. Like I said, I’m just super happy to get the result that we could and coming away with that.

Yourself and Troy [Herfoss] have been setting the benchmark over the past two rounds, really battling for the wins, and a couple of mistakes from him have helped the end result in you getting the overall. How’s it been battling with somebody new this year in recent rounds?

The races have been pretty full on. There’s been basically tenths of a second between Troy and I in the races together and it’s been amazing. It’s been a great spectacle to watch, I’m sure, and I’ve been enjoying it. It’s a little bit difficult to park my ego and think championship, rather than outright race wins, but I suppose I haven’t been under too much pressure to get those race wins either. I’ve knocked the edge off it a bit, but in saying that Troy’s been riding really, really well and I don’t know if I could have beaten him in those races. 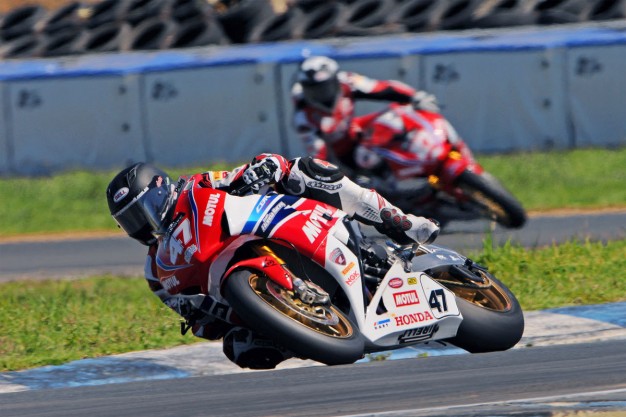 Last weekend was the second time we’ve been to Wakefield this year, so do you feel like you’ve progressed much with the CBR1000RR SP, the team and your structure since round one?

Absolutely. I did a whole race run at Wakefield on the weekend with laps that were faster than my single best lap at the first round. That’s a full credit to Team Honda Racing that we keep getting stronger and stronger. I’m sure people are thinking ‘how do they keep improving?’ but when you have four guys and their technicians pushing each other there’s only one way to go and that’s forward.

Just how good is the SP in race trim? It’s been dominant as the season goes on – amazing results for Honda with that bike.

It gives you confidence straight away. Troy had a year off racing and he had confidence from the word go. That’s something Honda has always done with their motorbikes and the SP is a refined example of that. When I first got on it after last year, the SP gives you that extra confidence and inspires you to go fast.

In terms of the ASC championship with one round remaining, you have a 21-point lead on Jamie [Stauffer] entering Sydney, and also are leading the Saturday FX series as well. What’s the game plan?

Just continue on with attack mode. We saw how quick it can go wrong with that mechanical DNF we had on Saturday at Wakefield, so I just need to keep doing what I’m doing and it worked for me last year to attack all the way down to the final race, which I won. I’ll just continue to do that and the rest should take care of itself.

Thank you mate and well done once again.