I missed my chance at MotoGP stardom not long after I popped out of the womb, blessed with none of the required talent and always doomed not to be even a decent amateur racer, let along a professional one. But that hasn’t stopped me enjoying motorcycle racing.

The great scribe Ernest Hemingway once famously quoted, “There are only three sports: bull fighting, motor racing and mountaineering; all the rest are merely games”. Out of all his timeless lines, this has to be his best, doesn’t it?

So, filled with the gusto that only comes from an inflated sense of one’s own ability and wanting to participate in at least one of the only three sports there are (I’d make a crap mountaineer and bull fighting, forget it) I gracefully accepted an offer from Kawasaki Australia to use their Kawasaki Ninja 300 as my sword in the Highlander battlefield that is the Kawasaki Motor Insurances FX 300 Ninja Cup at the fifth round of the 2014 series at Wakefield Park.

The Kawasaki Ninja 300 is the second-highest selling motorcycle in Australia, having sold 1442 units in the first half of this year. It’s a bike responsible for more new bums on seats than almost any other, and is the basis for a pretty handy little racer after a few mods like Öhlins shock, fork emulators, a race pipe and bodywork have been fitted.

The race machines run a control ECU to limit the tuning that can be done and to keep a lid on running costs, and you’re allowed two sets of marked tyres (in my case Pirelli Diablo Rosso Corsas) for Saturday and Sunday’s races. 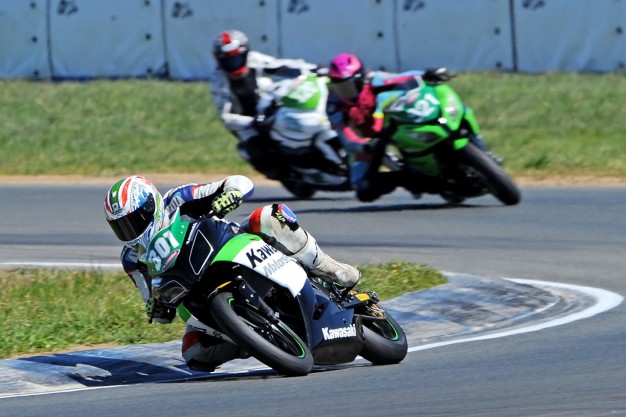 The engines are near bulletproof, perfect for low-cost racing, revving to around 13,000rpm with a good spread of power from 8000rpm onwards. To get set up will cost you around $10,000 for the full kit, which is pretty good value motorsport.

One-make race series are the best there are. They give everyone the same opportunities for ultimate glory, so it comes down to how hard you reef the throttle cables open and how long you hold the gas on for.

With about 45hp on tap with the 300, bravado is numero uno. It’s all about braking later, accelerating harder and cornering faster than the next guy. And when you’re about 25kg over your fighting weight like I am, you can double the importance of those points. It’s like fat Tyson fighting fit Tszyu out there.

This weekend held special significance for me. It was my first as a real (not really) factory rider. The bike belonged to Kawasaki Motors Finance, legendary factory tuner Glenn Willing prepared it, and my tyre changer was none other than Aussie racing icon and a man who bleeds green blood, Murray Sayle.

I had current Australasian Superbike Champion Matt Walters as my garage partner and his dad Carl, mum Sheree, girlfriend Kate, brother Mitch and his partner Jess for morale support. I even got in and out of my leathers in the Kawasaki race team transporter. Yes. I was factory, baby. I’m coming for ya, Maxwell… 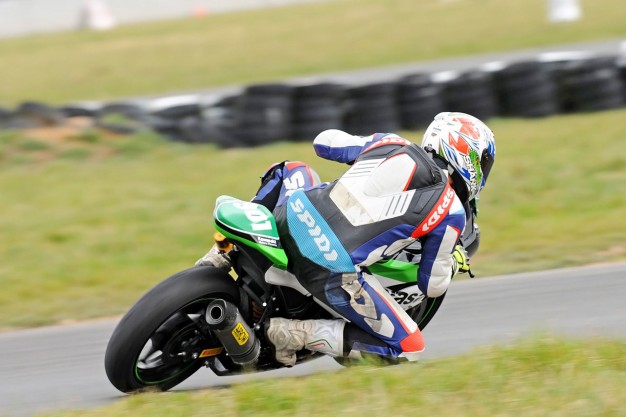 However, not being on the track since March this year precipitated a drastic loss of form. Y’see, I did a season in the FX450GP class last year, won a few races, and thought I might not be so average after all. But one session on the 300 on Friday morning bought me crashing down to earth like eagle shit.

Trying to bend a frame more used to an office chair onto a LAMS 300 bike was harder than I thought, but slowly, slowly, I started to remember what I was doing (the Ninja demands more corner speed, always more corner speed, grasshopper…) and by the end of the first day I’d managed to stick the Kawasaki Motors Finance Ninja 300 (to give my bike its full and correct name) onto the front row of the grid in third place. Not bad for a plus size model, I thought.

A few beers and a massive steak later, I woke at 4:00am for Saturday. Goulburn is freezing at night and the cold had permeated my doona so rather than fight it, I lay there wondering how on earth I was going to run down two kids almost half my age in Brandon Demmery and Kyle Buckley without looking like one of those circus monkeys that ride pushies.

One part of that equation was out of the question, so I figured I’d just try turn back the clock to when I was their age. “There will be no pain, only glory,” I told myself. Ahh… delusions of grandeur at their finest.

Glenn and I spent the majority of Friday ratcheting up the pre-load on the poor rear spring so the 300 wouldn’t pogo around the corners like a beachball at Bondi, and each session the Ninja was a little better. It’s great working with someone of Glenn’s experience. His wealth of knowledge is gobsmaking. He’s seen and worked for the best riders on the best bikes for over 30 years, so a hack journo on a little 300 is child’s play for him. 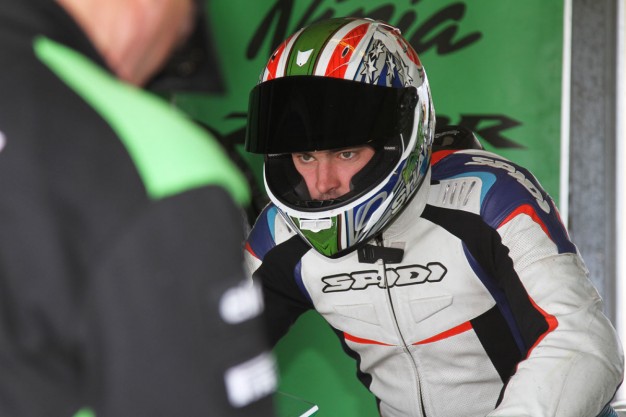 The program for the weekend was three races per day on Saturday and Sunday, with new tyres each morning. Saturday dawned cold and dewy (no surprise there), and I was quietly confident for race one.

That one ended abruptly with a massive multi-rider pile up at turn two after only two laps had been completed. With one rider airlifted to hospital and the crash scene looking like downtown Baghdad, it was a cold reminder that this sport will bite and bite hard if you’re not careful.

Race one was declared with me only a gnat’s little one off the lead in fourth (the whippets hadn’t had the chance to pull away from me yet), so I would line up fourth in race two. A jump start and the subsequent 15-second penalty dropped me to 10th overall after crossing the line in fourth, so for the final race of the day I figured I had nothing to lose (save for the bike, pride, broken bones, embarrassment and all that stuff), and went for broke.

I caught the leaders after riding my ring off, pinched third from New Zealander Bailie Perriton with two laps to go (we would meet again, this Kiwi and I), and set the fastest lap of the race but couldn’t quite take the lead after saving the biggest front end slide of my life on the last lap. One more lap though…

So a podium to round out the day and pole position for Sunday thanks to the fastest lap was a bit of all right, and as I put my head on the pillow late Saturday night I knew I had the speed and would thus smoke the competition tomorrow. Wrong. 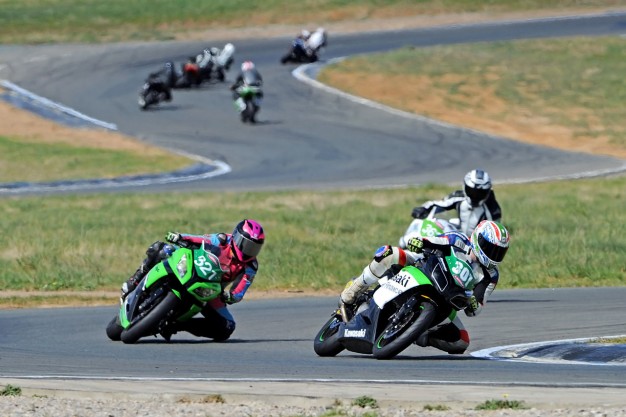 For Sunday, Glenn put a turn and a half of pre-load on the front, two turns on the rear and three clicks of rebound on the Öhlins shock to try and keep the little Ninja from trying to crash itself into next Friday each time I tried to push. But I needn’t have worried; the crashing was assured.

When you qualify on pole position, the first thing you need to do is make the most of it. This most basic of racing rules I did not follow. I fluffed the start, dropped back to fifth and instantly Demmery and Buckley cleared off. And I mean instantly.

By lap two I’d caught back up to Perriton, and promptly took my third place off him at the last corner. How dare this not-of-beer-age Kiwi occupy my third place? Unfortunately, Bailie was thinking the same thing of me; only I was twice his age. After undercutting me on the exit of the corner (fair play), he ploughed straight into my right side and sent me flying into the gravel trap (decidedly unfair play).

My leg was caught under the bike so the damage to the mighty KMF 300 was minimal, and as I stormed back to my pit, a few polite profanities may or may not have been heard. He did apologise to me afterwards and he is only 16, so I won’t be too harsh on him here.

I felt worse for Murray and Glenn. Journos never get the chance to race a bike on someone else’s chequebook and the last thing I wanted to do was drop the thing. Plus I was now starting from 21st for race two thanks to the progressive grid rule. 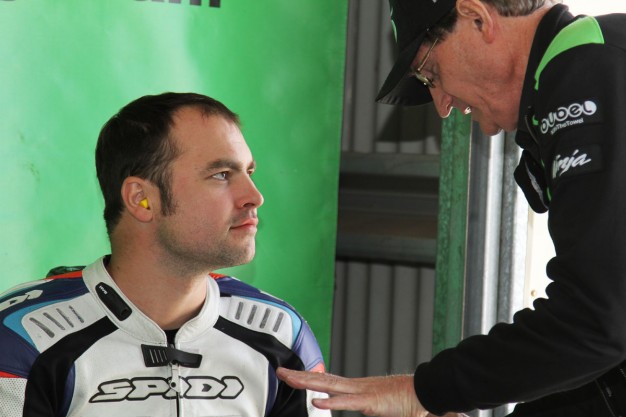 The final two races of the day were all about catch up. I managed to claw my way back to fifth place by the end of race two and fourth in race three after another bar bashing session with Perriton. The take-no-prisoners attitude is strong in this class.

Buckley won the day after a bell-ringer with Demmery in all three races with the always lovely first lady of Australian racing, Sophie Lovett, taking third overall. Due to my race one DNF I finished eighth, but I couldn’t have thought of a better way to spend a weekend. Still can’t.

There’s nothing like that first beer at the end of a race meeting, especially if you’re not too bashed up to enjoy it. You’re on the biggest adrenaline rush and the feeling of that first sip is like the first 10 seconds after another fun activity that’s usually over far too quickly. Racing motorcycles is like that.

I mustn’t end this article without saying a huge thank you to Richard Harding from Kawasaki Motor Finance and Murray Sayle and Glenn Willing from Kawasaki Australia. Having Sayle as my right-hand-man for the weekend was a buzz in itself. And to the Walters clan for feeding me and making me feel such a part of the crew, thank you indeed. 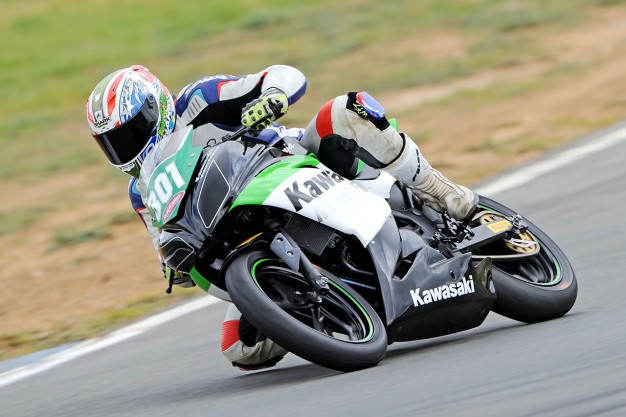 Kawasaki Australia must also be commended for creating the Kawasaki Motor Insurances FX 300 Ninja Cup. This is the perfect road racing stepping stone for those on a budget, inexperienced riders, those wanting to start a road racing career or those who just want to have some fun. The competition is such that the pace out front is frantic but with a huge grid of over 25 bikes you’ll always have someone to race with, which is what it’s all about.

Manufacturer support is vital for a series like this to thrive and help maintain costs via the control ECUs the teams all have to run and the limited tyre allocation, and judging from the full grid of riders at Wakefield Park, Kawasaki looks to be hitting the mark.

If you’d like to know more about getting involved in the terrific Kawasaki Motor Insurances Ninja 300 Cup, give the Australasian Superbike Company a ring on (02) 4823 5711 or email [email protected]