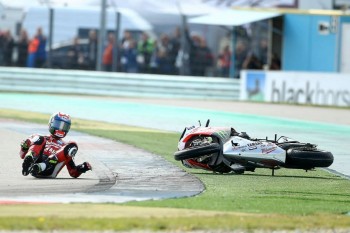 Australian Josh Brookes faces a 51-point deficit in the battle for the 2014 MCE British Superbike Championship following a double DNF at Assen on Sunday.

The opening race of the day started dramatically for Brookes when he didn’t exit the pit lane before it closed after an extended sighting lap period. The Milwaukee Yamaha rider started from the back of the grid, but his hopes of salvaging points were dashed when he crashed on the opening lap.

In the second race Brookes was sidelined with a clutch issue as title rivals Shane Byrne and Ryuichi Kiyonari raced to the top steps of the podium.

“In race one I had to start from the back of the grid as I entered the pit lane,” Brookes said. “At the start of the race I felt good and everything was going well until turn four.

“I thought ‘I can go round people’ and I started to accelerate, until I ran straight in to the back of Kirkham – he just didn’t accelerate and I fell off.

“I always seem to make things difficult for myself every year, but it is what it is and I couldn’t have done anything different.”

Team Owner Shaun Muir said: “What can I say? It has been a complete disaster for Josh. Race one couldn’t have gone any worse – missing the pitlane exit and then a crash, it goes without saying that was a huge disappointment for all of us.

“In race two it was a clutch problem that forced him out of the race and that left him scoring no points at the most important part of the season. It’s a test of character and strength now to turn this around, but as a team we want and need to bounce back now at Silverstone.”

Brookes is now 51 points in arrears of Byrne in the Title Showdown with just two rounds remaining.