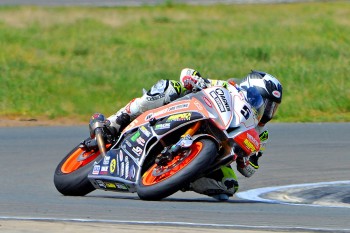 Queenslander Aiden Wagner will travel to Europe for a shakedown test with the Marc VDS Racing Team prior to his high profile Moto2 World Championship debut at Phillip Island on 17-19 October.

Wagner, 20, will compete alongside world championship leader Tito Rabat and Mika Kallio within the Marc VDS outfit, which will also field a Honda-supported MotoGP team in 2015 with Scott Redding.

The European test will take place at Almeria in the south of Spain next week after Wagner attends this weekend’s Aragon round of the world championship.

“I can’t believe what is going to happen,” Wagner commented. “It hasn’t really sunk in yet. From something that was maybe happening, it has all come together in the last couple of weeks. To be supported by Marc VDS is something you can only dream about.

“They are one of the most professional teams, so I know I will have the right equipment to do the job. This is an amazing chance to race against the best and show what I can do – it is all up to me. I can’t wait!”

The invaluable Spanish test comes as a major boost in the lead-up to Phillip Island’s race weekend, enabling Wagner to learn the unique characteristics of the Kalex Moto2 chassis, Honda engine and GP specification Dunlop tyres in a low-pressure environment.

“Obviously being at my home track is a big advantage, but to be able to the test the bike and get to know the team will be an awesome benefit as well,” he added. “I can adapt the bike to my size and also get used to the bike, the suspension, the electronics and the Dunlop GP-spec tyres that will have so much more grip than I am used to.

“When we go to Phillip Island I will have a head start knowing the bike, so I will be able to concentrate on being competitive from the first session.”

Wagner is also looking to secure sponsorship to assist in the funding of his rare wildcard opportunity, which will come with the category’s top team.

“To help with attracting sponsors, the team are leaving a lot of the fairing plain so we will be able to give some great exposure,” Wagner explained. “Hopefully, being supported by the Marc VDS team will make it more attractive for some sponsors to come on board, as at the moment it really is all a family effort to get me there.

“I can’t thank them enough for everything they have done as well as the others that have helped arrange this ride. It is a dream come true and I aim to make the most of it.”

Wagner is coming off a dominant clean-sweep at Wakefield Park’s fifth round of the Australasian Superbike Championship earlier this month.