Over 20 young Aussies sign up for Malaysian Selection Event. 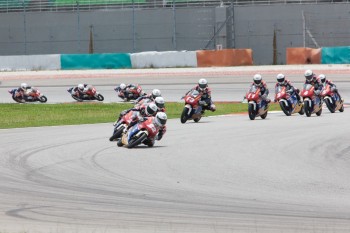 A total of 22 young Australians will tryout for the 2015 Shell Advance Asia Talent Cup at the official Selection Event, to be held at Sepang in Malaysia on 27-28 October.

The 174 young hopefuls aged between 13 and 20, from various Asian countries, in addition to Australia and New Zealand, have been invited to take part in the selection process for next year’s second staging of the Cup.

Having carefully analysed the applications, the selection committee directed by Spanish talent scout Alberto Puig have chosen 174 candidates, who will be asked to demonstrate their riding skills on Honda machinery over two days of testing at the Sepang circuit.

The event at the end of October will be held just after the 2014 Shell Advance Malaysian Motorcycle Grand Prix in a first step towards turning potential into performance.

Following the Selection Event, the committee will meet again to finalise the list of the 22 riders who will take part in the 2015 edition of the Shell Advance Talent Asia Cup.

In addition, three New Zealand riders have entered including Bailie Perriton; a regular in the Australian-based FX 300 Ninja Cup.