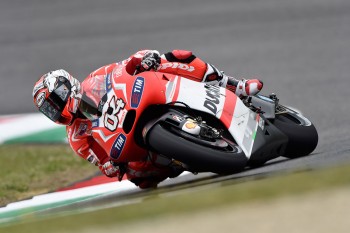 Ducati arrive in Spain for this weekend’s Gran Premio Movistar de Aragon off the back of a test on Tuesday, 23 September, at the Mugello circuit in Italy.

During the test Andrea Dovizioso, together with his future teammate Andrea Iannone, were able to shake down the ‘evolution’ version of their Desmosedici, called the GP14.2, for the first time.

The two Italian riders will continue to test the bike during the Aragon race weekend.

Dovizioso has taken part in every edition of the of Aragon Grand Prix, his best result being a third place in 2012, while Cal Crutchlow’s best finish was a fourth place in 2012 in the three times he has raced at Aragon.

“Aragon is a strange track, it’s not one of my favourite circuits, but we have been going really well in the last few races this year on tracks with very different characteristics,” Dovizioso said.

“So I also expect to go well at Aragon, just like we did at Silverstone and above all at Misano, which was a really special race. We are now becoming a more competitive reality and I am very happy with our constant progress.”

Crutchlow was absent from the Mugello test and won’t have access to the GP14.2, coming off the back of news he will head to LCR Honda alongside Australian Jack Miller in 2015.