Lowes to remain in WSBK with Crescent Suzuki 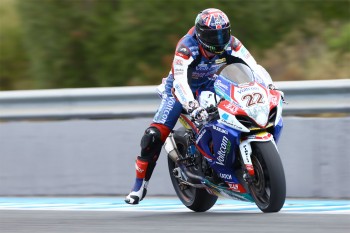 Despite a rocky start to his rookie year aboard the Yoshimura-powered GSX-R1000 – fracturing his left foot during the season’s opening qualifying sessions at Phillip Island in Australia – the reigning BSB champion has developed well on the world stage.

Lowes has been demonstrating huge speed and achieving two podiums and two fastest laps in 2014 so far, with four races left to run.

“My first year with Voltcom Crescent Suzuki in the world championship hasn’t always been easy, but overall it’s been great!” Lowes reflected. “You learn a lot about yourself and the team when things don’t quite go right and now at this stage of the year we know exactly where we need to improve, both on and off track.

“I’m really enjoying my riding again after some injuries early in the year and looking forward to continuing my improvement and being more consistent in 2015. My second year will allow me the opportunity to continue my development with the benefit of a year’s experience, so I’m really looking forward to the next stage in my career.

“I want to say a huge thank you to the Voltcom Crescent Suzuki team and all the sponsors and partners for their continued faith in me, bringing me up from BSB champion to the world level and continuing that support into my second year. I’m confident we can challenge at the front with the Suzuki GSX-R next year and will be aiming, as ever, to achieve my very best for all involved.”

Extending his contract with Voltcom Crescent Suzuki for a further 12 months, Lowes will remain with the team until December 2015 and will be back in action on his GSX-R1000 next week at Magny-Cours in France for the penultimate round of the 2014 championship.

The team previously confirmed the exit of Eugene Laverty, who’s expected to join Nicky Hayden at the Aspar Honda team in MotoGP next season.