Further wins on the radar to retain series lead. 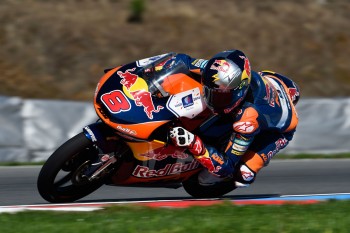 Australia’s Jack Miller will have to return to his winning ways in a bid to clinch this year’s Moto3 World Championship before stepping up to MotoGP in 2015.

He returned to the podium at San Marino, but Miller wants to add more victories to his tally in the five remaining grands prix this season. The first opportunity for him comes this weekend at MotorLand Aragon, where he will attempt to extend his current nine-point lead in the Moto3 overall standings.

Miller wants to fight for the win at a circuit where he has already undertaken tests this season. Calm and comfortable on his KTM, the Aussie is confident of putting in his best showing at this track.

“MotorLand Aragon has a couple of long straights, so we have to work on our top speed,” Miller explained. “We had a couple of tests there and the pace we showed was very good. Now I’m raring to get out on track, because I quite like the circuit.

“We go there off a good podium at Misano and I think we’re heading in the right direction. We are strong and we will push our hardest at MotorLand to be able to fight for victory. Then we will see where we are.”

Behind Miller in the title race are Estrella Galicia 0,0’s Alex Rins and Alex Marquez; the two in-form Honda-mounted riders in the late stages of the season.