World champions speak out about Australian's step from Moto3. 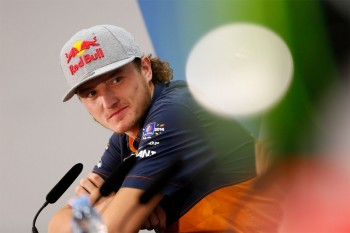 MotoGP megastars Marc Marquez and Valentino Rossi will take particular interest in Aussie Jack Miller’s direct transition from Moto3 to MotoGP in 2015, speaking on the eve of this weekend’s Aragon Grand Prix at the pre-race press conference.

A former winner of the lightweight class world championship and the current MotoGP World Champion, Marquez gave his perspective on Miller’s arrival in the premier class for 2015.

“It will be interesting to see Jack at Valencia for the first test, the step is very big,” Marquez commented. “When I was in 125s I didn’t feel ready to go to MotoGP directly, I stayed in Moto2 because it was necessary for me. For him maybe it’s different. It will be hard at the start for sure but we just have to wait and see.”

Another rider who won the 125cc world title before going on to win the world championship at the highest level seven times, Rossi was also asked for his opinion on Miller’s move.

“I think the biggest challenge for Jack will be to start with the right time, because it’s very easy to say, ‘I have time to be quiet and learn’, but when you’re on the track you want to give the maximum,” Rossi explained.

“The step is very big and Jack is very brave. I’ve spoken with him and he wants to do this – the bike will change a lot, the speed, brakes and tyres. He has to be clever and quiet and understand it all step by step and focus on getting results in the second half of the season.”

Meanwhile, Miller remains optimistic that he will be able to handle the transition once he climbs aboard the CWM LCR Honda RC213V-RS at the post-season Valencia test – ultimately shrugging off concerns that the switch from his 250cc Moto3 machine is too large.

“I’m over the moon to have this chance, but of course you know there will be a lot of questions,” Miller said. “When Marc went up to Moto2 he was lighter and smaller than me, so physically I think I can ride now in MotoGP.

“I’ve only been on a road bike since 2009, so it’s a big step. It’s a long-term project and with the time and attitude we can do it. It’s just a bike with two tyres and an engine.”