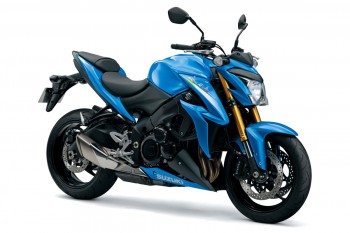 Based on the previous generation GSX-R, the GSX-S is Suzuki’s first foray into the aggressive end of the nakedbike market while the F model is a new direction for the brand.

Powered by the ’05 generation GSX-R1000 999cc engine, Suzuki has tuned this nakedbike for the street by giving the engine less aggressive camshaft profiles.

The chassis may look like it’s off the GSX-R1000, but it is slightly more relaxed in its dimensions and carries the same high-spec running gear with Brembo brakes and KYB front end.

The styling of both machines draws heavily from the GSX-R1000 and there is added suitability for road riding in the GSX-S1000F with a full fairing and adjustable screen.

Both models are due to be on showroom floors in autumn 2015 with pricing announced in the new year.