Fourteen-year-olds don’t normally say a lot – let alone plucking up the courage to front the owner of the Phillip Island Grand Prix Circuit and ask for sponsorship.

But that’s just what skinny South Australian Olly Simpson did in 2012 when he bowled up to Andrew Fox as he was standing in the trackside paddock. At that stage, Olly was dominating junior road racing in Australia.

“Mr Fox, my name is Olly Simpson and I hoped I could share with you my story,” he said at the time.

Olly then regaled Fox about his plans to pursue his childhood passion and natural talent – the art of racing bikes – on an international level and asked Mr Fox if he would consider sponsoring him.

Fox, the son of trucking magnate Lindsay Fox and owner of Australia’s largest transport group, the Linfox group, was impressed by the youngster’s articulate, off the-cuff presentation, his sure vision for his future and his professionalism. 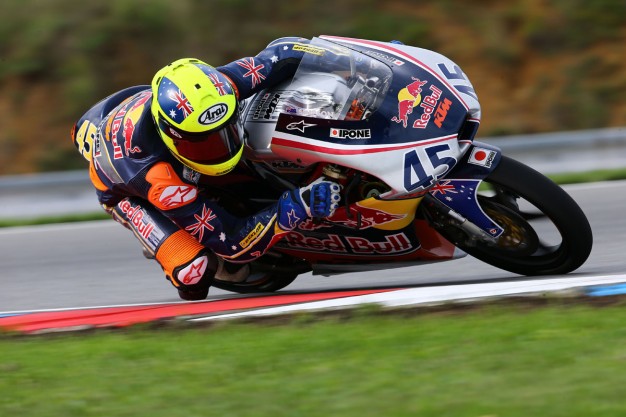 Simpson nabbed his sponsor and the following season his international journey began in the Red Bull Rookies MotoGP Cup. Now, two years on, Olly is only days away from another milestone – competing in his first world championship grand prix as wildcard in this Sunday’s 23-lap Moto3 race at Phillip Island.

“I have always wanted to do the wildcard thing at the Phillip Island Grand Prix Circuit but have always been too young,” said Simpson. “But finally this year I am old enough so I put in my application and we got selected so I am very excited and happy to have this chance.”

The 50kg pocket rocket will race a ‘production’ KTM at Phillip Island, but still believes he will take a couple of scalps on a circuit which suits his style of riding with its fast, sweeping turns.

“The expectation will be to beat some of the permanent Moto3 riders at Phillip Island. I think this is a realistic goal,” Simpson said. “My KTM is exactly the same as I use in the Red Bull MotoGP Rookies Cup.

“They are not quite as fast and don’t handle as well as a full Moto3 GP bike, but our qualifying times in Rookies are usually the same as the rear of the Moto3 grid. With the Australian support at my home GP it should encourage me to go as fast as possible. It will be a lot of fun.”

Simpson, who hails from the Adelaide Hills, is based just out of Barcelona with dad Nathan during the international racing season. He recently completed his second season of Red Bull Rookies in 11thth position, a five-spot improvement on 2013. His best results in 2014 have been fourth places at Assen and Mugello. 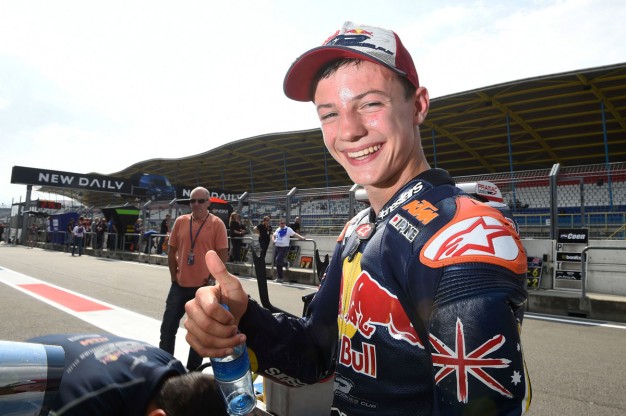 “The highlight of this season was Assen when I was in third position going around the last corner but just got beaten to the line. At Sachsenring, I also qualified on pole position but unfortunately I crashed out in both of the races while I was battling at the front. I can qualify really well and I can make my own pace but I need to turn my qualifying pace into race results.”

Simpson, who does his Australian schooling by correspondence while following his racing dream, has a twin sister, Taylah, as well as two brothers, Mitchell and Jordy. His mum Leanne stays with his siblings and runs the family business, while Olly chases his bike racing dream. He hopes to continue his Red Bull Rookies career in 2015 with a top three finish in his sights.

“I want to get on the podium and start winning races and the challenge is to become mentally stronger,” he added.

Remy Gardner will be the second Aussie wildcard in Sunday’s Moto3 race at Phillip Island, while Jack Miller will continue his championship battle with Alex Marquez at the sharp end of the Moto3 pack.