A perfect score for Team Honda Racing’s Josh Hook saw him not only sweep the second round of the Phillip Island Superbike Championship but also, and against all odds, claim the overall title. CycleOnline.com.au speaks to Hook about his success at the MotoGP event last weekend. 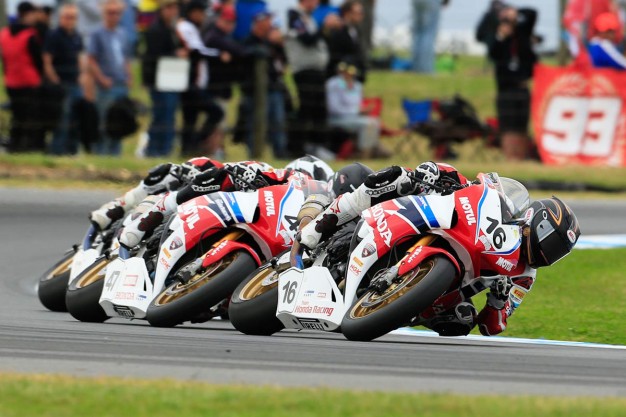 Congratulations on the win, firstly. Pole and a clean-sweep is a tough ask in such a competitive category – did you think you would be this dominant?

Look, if you said at the start of the weekend that I could get a pole position and the clean-sweep, I’d have thought that’d be setting my goals a bit high. Ideally that’s what everyone wants to do, every racer wants a perfect weekend, and this has been my first perfect weekend in a long time. It was good to do it and it was a great to do it in front of a lot of people, with the MotoGP crowd there. I was happy to get the job done. The other fellas rode really well – it is always really hard to beat the likes of Wayne Maxwell and Jamie Stauffer around here. I went out and was fastest in practice and qualifying too, so I was riding on a lot of confidence. At the end of the day I think that’s a big help, when you’re confident in the bike, the team and the track. You’re always going to go a lot better. Everything really did go my way. I didn’t have any problems and the bike was working really well and we got some really fast lap times out of it. A massive thanks to Team Honda Racing for their efforts!

The bikes are slightly higher-spec than the Swann Series and you used a different brand of tyre on the weekend; a couple of significant changes that obviously suited your style?

The bikes are a little bit faster than the Swann Series configuration and we’re running Pirelli tyres. There seemed to be better grip with the tyres on the weekend and also the bikes are faster too, which makes it more enjoyable to ride. It’s the best circuit in Australia to ride and to have everything working the way it was was a pleasure.

Once you got that first race win in the bag, did you think it would be possible to keep going and take out races two and three?

Not really. Like I said before, with the likes of Wayne, Jamie and Troy out there, I didn’t think I’d be able to pull much of a gap at all. I think the first race I got a bit lucky there with the problems Wayne and Jamie had, but in the second and third race they kept me on my toes. I think it just came down to consistency, every lap was within a hundredth of a second. To be fast and consistent was definitely the key to the win down there. And all credit goes to the team, they had a bike that was working well and it made it easier for me to do those time.

In order to beat Jamie to the Phillip Island Superbike title you had to win the two final races. Was this factor in the back of your mind the whole time?

The Superbike title wasn’t in my mind at all up until Saturday night when I was thinking to myself I could win this thing. I was just going there wanting to win races, really. After DNFing in the first round of that championship, and breaking my neck and whatnot, and it being only a five race series, I was already behind the eight-ball. Having a perfect weekend turned that around though. I had to make sure on Sunday to go out and win that last race, and I think in the end I won it by two points, so I was stoked with that. 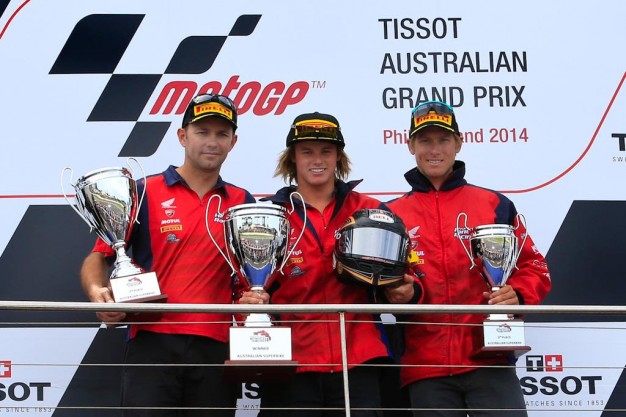 You won all of the races you finished at Phillip Island, a tidy stat, but did you ever think you could take the title given the extent of the injury you suffered back in February?

It was unexpected. Phillip Island I’ve always loved and I seem to go well down there and it suits my style of riding. As you said, with the injury, one of the worst injuries I’ve had, that set me back there a fair bit. I lost a bit of testing time and the first round of the Swann Series. It’s still giving me a bit of grief now. But the main thing is I was able to get back on and I got the job done.

A clean-sweep at the business-end of any racing season is always going to be beneficial. Given that it’s unlikely Team Honda would run four riders again, this result does your opportunities for next year no harm does it?

Not at all. I couldn’t really have done it at a better place or at a better time. At this stage I’m not sure what I’m doing next year. The plans are to stay with Honda, whether that’s here in Australia or overseas. I’m trying to find a seat overseas, but at this stage I haven’t really got much on the plate. All we can do is keep chipping away and see what comes up. Ideally I want to be in a world championship paddock, whether that be MotoGP or World Superbikes, which could be long-term, and I might have to go down the route of an Asian or Japanese championship too. Ideally I want to race at world championship level, as most racers probably do. Hopefully something sorts itself out.

The Swann Series wraps up at Sydney Motorsport Park next month. Do you feel like you can carry this momentum forward and a cap things off on a high note?

Eastern Creek’s another good circuit – I like it so it’s good to finish off there. We’re behind the eight-ball in that championship after I missed the first round. I know I’m not in contention for the championship win so we’ve been mostly using the rounds for race practice and getting faster and going for individual race wins. To me, I was never in the hunt for the title after the injury, but if we can go there and have another good weekend to finish it off then that’d be great.