Austrian brand looking to release "MotoGP-spec bike that anyone can own". 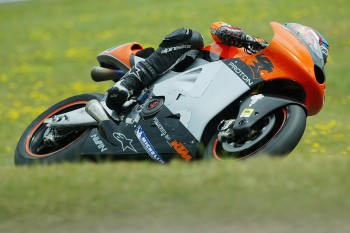 KTM’s return to MotoGP in 2017 is set to bring with it a MotoGP-inspired road bike as KTM strives to become the world’s leading motorcycle manufacturer.

Already Europe’s number one motorcycle producer, KTM’s PR man Thomas Kuttruf revealed in an interview with US Sport Rider magazine that the company was set to release a successor to the RC8 “built to the highest racing regulations possible – MotoGP. A MotoGP-spec bike that anyone can own for 2017”.

KTM has already revealed the MotoGP machine will be a V4 and their promising V4 MotoGP engine for Team Roberts in 2005 (pictured) never really got a chance to shine.

But it showed what KTM could do and after a trivial split with the team, they went on to pooling their resources into Hiroshi Aoyama and Manuel Poggiali in 250GP class the following year.

With Moto2 becoming a Honda-engined class in 2010 until 2015, KTM had room to move and develop. With rule changes in MotoGP in 2016 seeing control ECUs, and the return of Kawasaki, Aprilia and Suzuki all on the cards, KTM is set to return to the class on their own terms in a category that will be a much more level playing field.

While KTM’s return to the premier class is no surprise, the fact that they are proposing a MotoGP-derived production superbike is. With the RC8 a disappointment on the racetrack and showroom floors, a RC16 derived production bike would undoubtedly be a machine to catapult the brand to front of the field.

Whether it will become a limited edition run like Kawasaki’s H2R or a run-of-the-mill production machine remains to be seen.