An overview of the motorcycles uncovered in Milan this week.

Kicking off in Milan, Italy, on 4 November, this year’s EICMA had plenty of new motorcycle releases that thrilled and surprised. Following on from Cologne’s Intermot Show in October, it was always going to be hard to match the exhilaration bikes like Kawasaki’s H2R, BMW’s new S 1000 RR, and Suzuki’s GSX-S1000 created. But EICMA has gone better with a road-going GP bike, production supercharged sportsbike and a host of other impressive model revamps and updates taking place across the industry. Here’s a look over the major releases from this past few days from each of the manufacturers.

Aprilia:
Having secured the Superbike World Championship just a few days earlier, the Italian manufacturer continued the celebrations at the show and released a new RSV4 for 2015. Boasting more power through a host of engine updates, the RSV4 has had subtle styling tweaks and got a longer swingarm to improve traction. The RSV4 now comes as a base model RSV4 RR and a limited edition RSV4 RF. The RF will be built in a batch of 500, have a WSBK-esque paint scheme, and run Öhlins suspension and forged aluminium alloy wheels. The up-spec wheels and suspension is available as a ‘Race Pack’ for the RSV4 RR. Aprilia’s Tuono has been stroked out 3mm and given the V-twin an extra 67cc in the process. It accounts for a 3.8kW outright increase, but a whopping 15kW more at only 8000rpm than the 1000cc Tuono! Outright power is 131kW and peak torque has been pushed out to 120Nm. A revamped chassis set-up sees a 6mm longer swingarm for better rear suspension control, while the electronics have been tweaked to suit the extra power. The styling has been updated on the seat and fairing while a lower seat and narrower handlebar makes for a more comfortable riding position. The RR, like the superbike RSV4RR, carries Sachs suspension front and rear, while the up-spec Factory model gets Öhlins kit and forged aluminium wheels in place of the RR’s cast aluminium wheels. 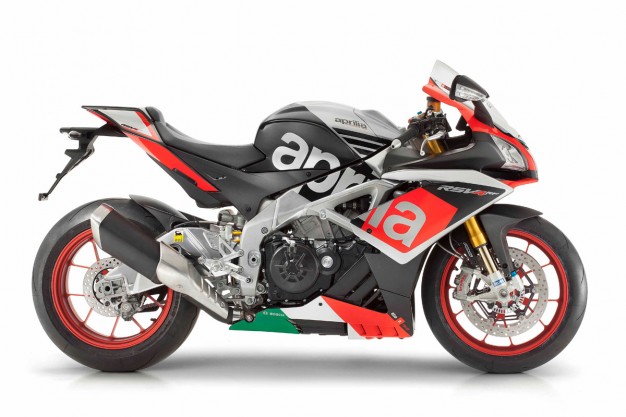 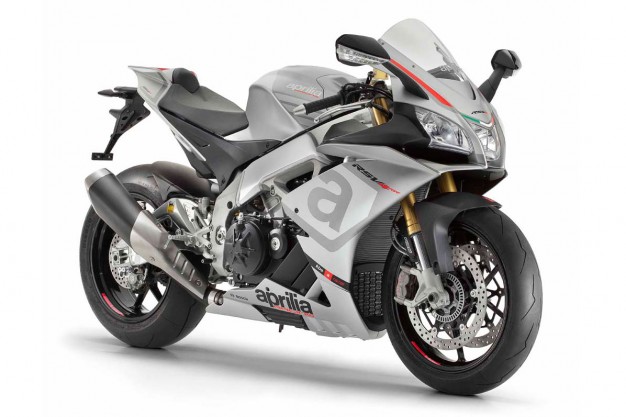 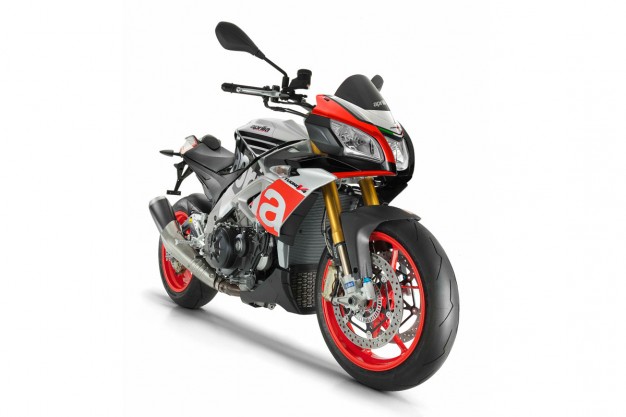 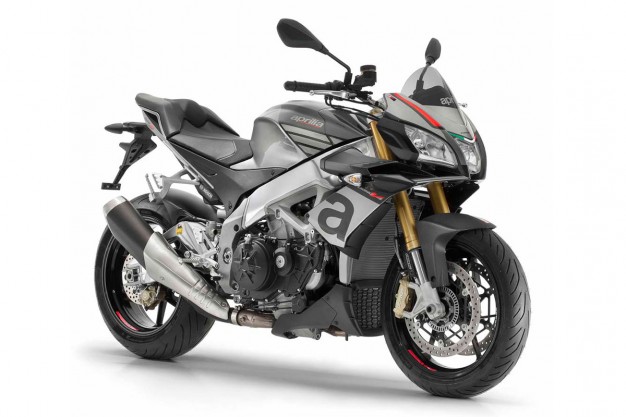 BMW:
We knew it was coming, but now we get to see it! BMW’s S1000XR has been one of the most highly-anticipated dual-sport models since news spread of BMW ‘Multistrada-ing’ the S1000RR. Not ones to disappoint, the new XR is the fourth model to sport the inline four-cylinder S1000 engine in a state of tune that delivers 118kW and 112Nm and, staying in tune with its roadbike nature, tailored for low to midrange response. There’s two riding modes, ASC (Automatic Stability Control) fitted as standard and options to build on these the likes of BMW’s ABS Pro and Dynamic Traction Control (DTC) systems. The front suspension is conventional – like the other S1000s, and unlike the K and R-series machines – with 46mm USD forks and rear monoshock that can also be run with BMW’s Dynamic ESA (Electronic Suspension Adjustment). BMW has also updated the F800R nakedbike. With an increase of 2kW and lower gearbox ratios for first and second gear, the F800R is a more aggressive nakedbike. The 800R gets upside down front forks, radial-mounted brakes and lighter wheels as the chassis upgrade. A new, more aggressive styling along with a lower seat and new handlebar give the 800R a more comfortable riding position. 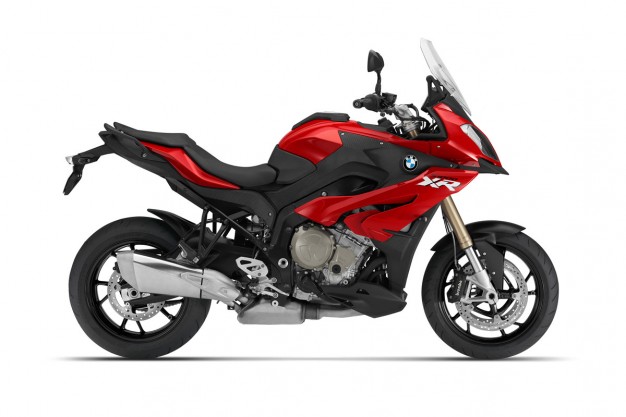 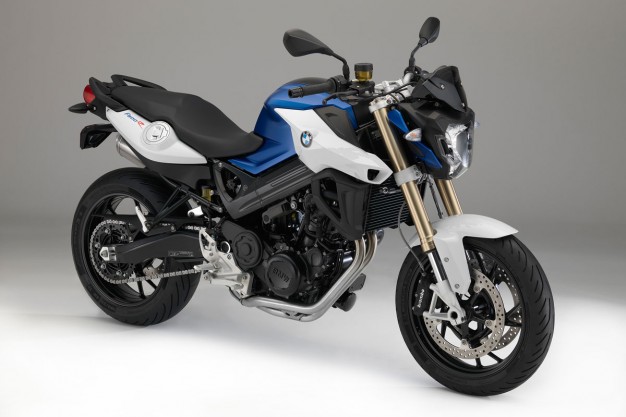 Ducati:
Ducati has taken the bold step of going bigger with their production superbike and pumped the Panigale out to 1285cc for 2015. With more torque, more power and less weight, the Panigale has an improved electronics package to deal with it too. Now featuring a Inertial Measurement Unit (IMU), available with Cornering ABS, Ducati Wheelie Control (DWC) and on the S version, the Öhlins Smart EC, an event-based control system for the suspension, the Panigale is one impressive package. Claiming 153kW and 145Nm, the Superquadro can now cope with clutchless downshifts via Ducati’s Quick Shift (DQS) system. A change to the steering head angle and height is designed to improve rear end traction – no doubt another advancement thanks to WSBK. Ducati has updated the Multistrada too giving it a variable valve timing system and the same IMU unit of the Panigale, a longer, height adjustable seat, lower pillion seat, adjustable windscreen and cruise control. The S model gets extra goodies like anti-wheelie control, integration of the IMU to the DSS (Ducati Skyhook Suspension), and cornering lights. 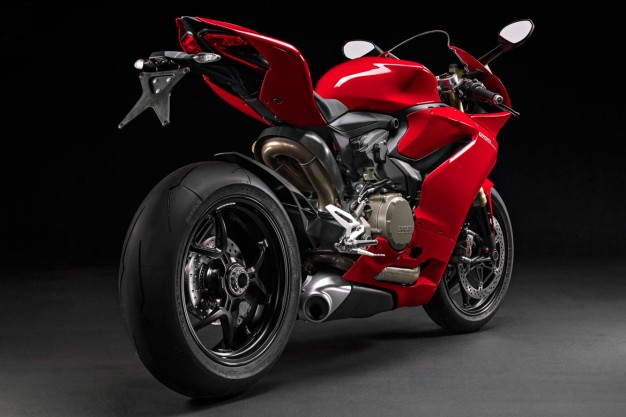 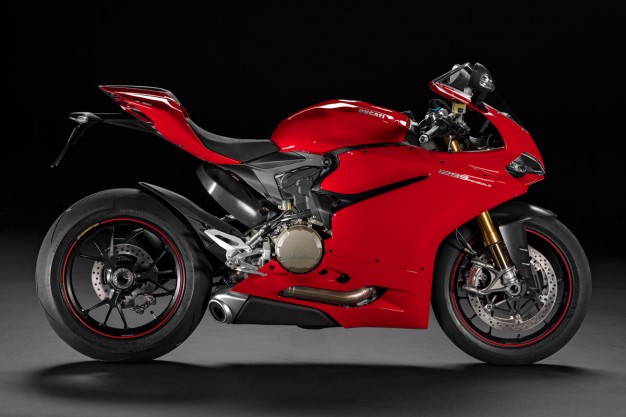 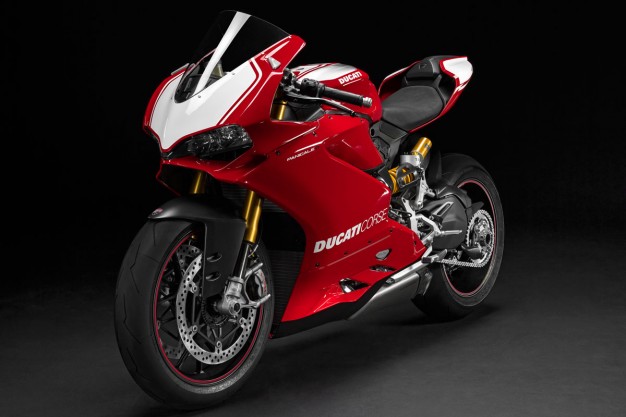 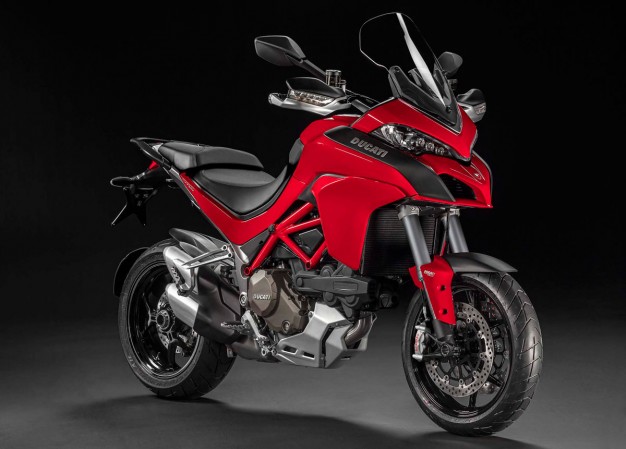 Honda:
Honda unveiled their MotoGP bike for the street at EICMA. Dubbed the RC213V-S, the bike created a huge stir but unfortunately at this point it is only a prototype. While details and specifications remain scarce upon the release, the model Marquez debuted was complete with road-going lights, mirrors, a tail-section developed for street use and treaded tyres, gauge reaction and use that to work out whether they should put the machine into production. We can only hope! The show paid tribute to Spanish wonderkid Marc Marquez by unveiling a special edition Repsol CBR1000RR SP. Due to arrive in March 2015, the new CBR1000RR SP will be available in strictly limited numbers, with only 60 of the bikes released to the Aussie public. 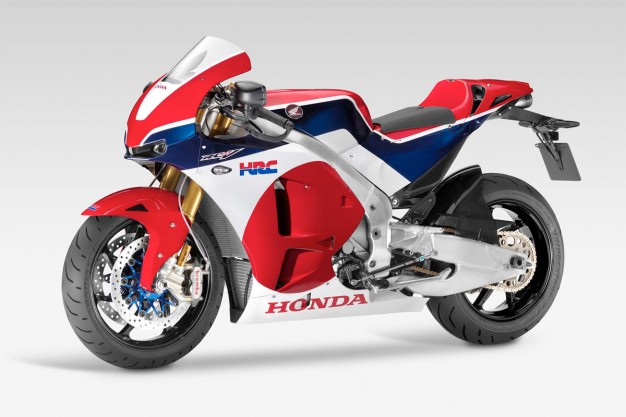 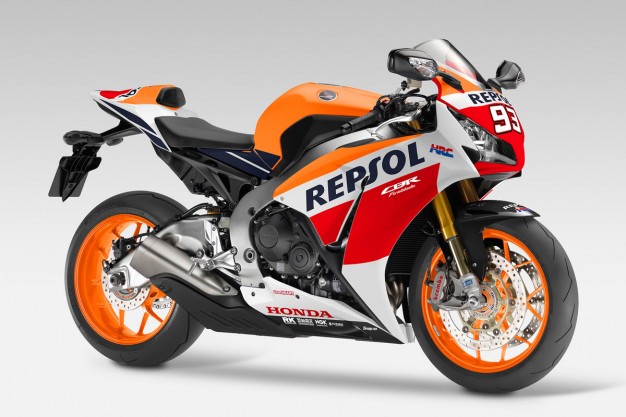 Kawasaki:
Kawasaki has unveiled the road-going supercharged Ninja H2 and while the max power of the H2 is a 200hp (147kW), the Ninja’s engine boasts comparable torque figures of much bigger engines with 134Nm of torque. Unfortunately weighing in at a porky 238kg, the H2 will nonetheless be an exciting motorcycle to ride with the 998cc engine dispensing intense acceleration. There is so much intricate detail to read over and look at that this paragraph can’t do the bike justice. Check out at www.ninja-h2.com and see what it is all about. At the other end of the spectrum, Kawasaki released a nakedbike version of their highly-successful Ninja 300 sportsbike, the Z300. With the same engine and chassis as the Ninja, and styling based on the bigger Z range, the little nakedbike is bound to be a hit with entry-level riders. 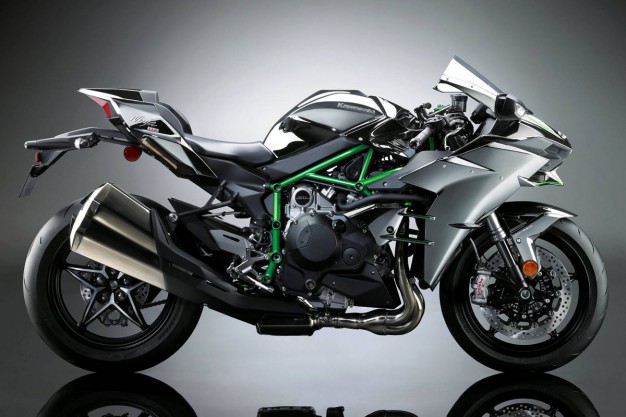 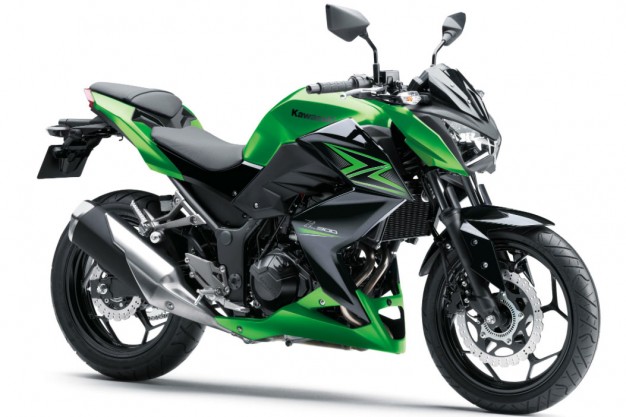 Yamaha:
The R1 has come in for its most significant update since the big-bang launched in 2009. Most noticeable of all changes is the MotoGP-derived styling which goes hand in hand with the extensive list of electronics that takes Yamaha from the brand lac king the most to the front of the field. There are significant changes to the design of both the chassis and the big-bang engine. A new Deltabox frame and lighter, redesigned engine components promise to make the much lighter YZF-R1 better than ever before. An addition to the three-cylinder engine range of Yamaha’s is the new FJ-09. Carrying Yamaha’s legendary sport-tourer model name, the FJ is an 847cc, 120-degree inline triple. With long travel suspension, comfortable ride position, and wide rubber, the FJ looks to be a perfect choice for the back roads. 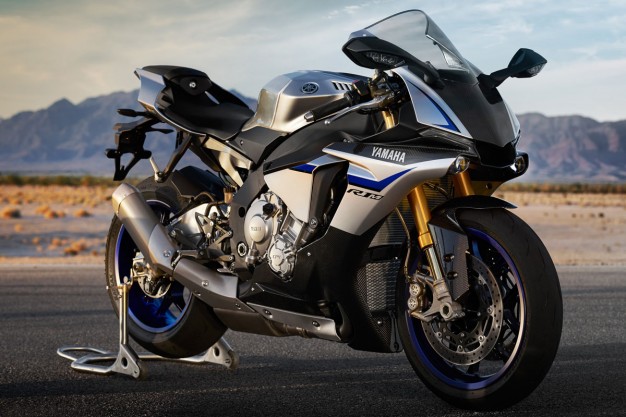 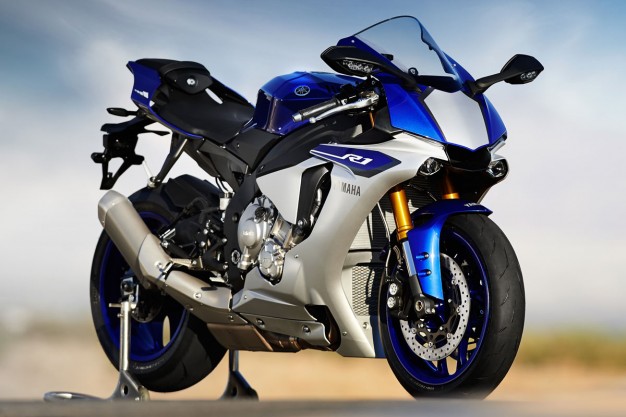 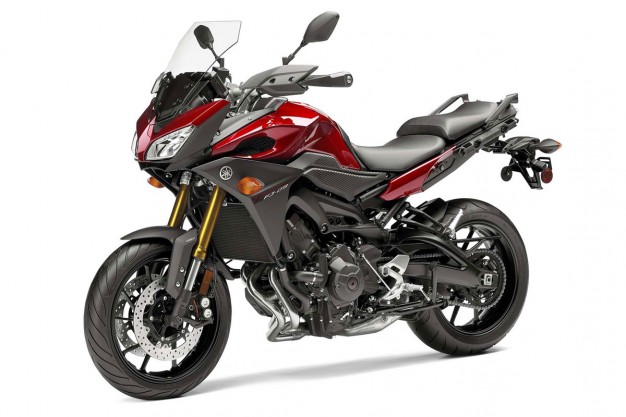