At 32 years of age, Wayne Maxwell has mastered what it takes to win Superbike championships in Australia, adding not one, but two to his tally at Sydney Motorsport Park last weekend. Team Motul Honda rider Maxwell won both the premier Australasian Superbike Championship and the Saturday-run Australian FX-Superbike Championship, proving he was the class of the field throughout season 2014. CycleOnline.com.au spoke to Maxwell today about the year that was and where we will see him in 2015. 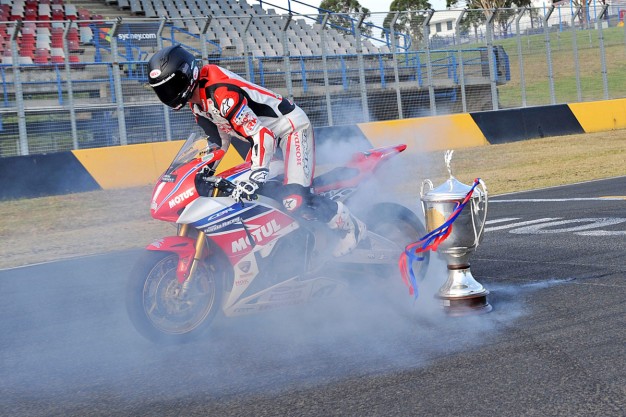 Congratulations on the championships – two in the one weekend – so it was obviously a really good result for you in 2014.

Yeah, I’m really happy. To first wrap up the Saturday championship and then the Sunday one, which everyone wants to win with television, live streaming and the bigger crowds, it was a great achievement for us.

It was super-hot on the weekend and tyre usage played a big part, so the on-track action was as tight as we’ve seen with various riders at the front throughout the three races. A mistake in race one really made you work for it…

I didn’t have the greatest feel all weekend after racing at the Kings of Wanneroo and the MotoGP on a different spec tyres. We got a little confused, a bit lost, and it took a while to find my feet. But we got better as the weekend went on – there was nobody to blame but myself in race one. I owe it to my team, digging in all year to ensure that we got the championship across the line.

In race three were you aware of where you were on the track and where Jamie [Stauffer] was, to make sure you were in a position for the championship?

100 percent I was aware – I knew where I had to finish if Jamie won and on the pit board they’d tell me when Jamie had gone back a few positions. It was all fine and no dramas, so I was just playing it smart. I had a gap to Mike Jones of two seconds, then it came down to one, then zero and at the same time Glenn [Allerton] was holding me up. I was trying not to be too aggressive, trying to play it smart and thankfully it all worked out okay. In the end I had enough points to secure the championship.

You’ve been a front-runner ever since first teaming up with Honda in 2008, always in it for the championship no matter the class or team you’ve been on, but these last couple of years you’ve managed to win the two most prestigious championships in the country. How good does it feel to establish yourself now as essentially a back-to-back champion amongst the best in the country?

I don’t think there are many people that have won both the ASC/FX or Australian Superbike titles – I might even be the first – so it’s a pretty special feeling to do that in two different teams and with two different regulations. The person I had with me all along was Warren Monson, my mechanic, and he’s been unbelievable. After being at Honda and going away, then having them put faith in me again when I didn’t have a ride at the start of this year, it was special and there was a lot of emotion to do it.

How would you rate last year’s ASBK championship versus this one in the ASC?

Trying to compare them is a lot different, you know? Last year was my first with the team [Suzuki] and there was a lot of pressure, so to win that was special. But to come back here to Honda in a completely different series with a lot of factors going on outside of what we do on the race track, it means a lot as well. The year didn’t start off great, I had a few injuries and more later on, to still be able to win when your back’s against the wall is a good feeling. It’s a true testament to how good the team is and how it all played out for myself. 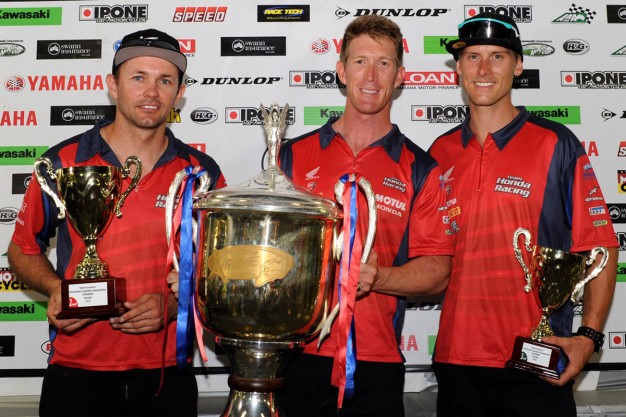 Honda dominated this year with all round wins and 1-2-3 in the series. What was it like alongside Jamie, Troy [Herfoss] and Josh [Hook], battling so closely on track but being in the same truck together?

All year we didn’t have one blue. Sure, there is a bit of tension at times, but overall we got along great – everyone whether they won or had a bad day got congratulated or a “you’ll be right, mate” and we all shared information. The main focus was that Honda was at the front. To be honest though, it is difficult with all four teammates at the front like that, and to do it again for a second year I don’t know how smooth it would be. It was awesome this year though and if I could pick all three guys as teammates, it would be one of those.

Where are you at in terms of next year? What can you tell us at this point?

I think I need to think long-term, as in what manufacturers are doing. Honda’s bike is still the same, but obviously hugely competitive. 2015 is not going to be as easy as 2014, I don’t feel, so I just have to put myself on the best seat possible. At Honda I know the team, I know the bike and at this stage it is my best option to stay where I am. That’s what I’m looking to finalise within the next seven days.

I know it’s not announced yet where Honda is racing, but is it a concern of yours what series the team is in? If things go your way, could we see you in the ASBK and ASC?

My main goal is to secure a ride in one championship on a factory seat and then after that we’ll decide what else we can do. I’d like to defend my championship, so if I am to race ASBK if that’s the choice of series that Honda makes and that’s who I end up with, then I’ll work on a deal to defend my ASC title.

What about internationally, this year you raced select World Endurance rounds, so is that an option again moving forward?

I’d like to do it again, but it’s very difficult. This year I’m quite worn out, especially because there wasn’t a lot of financial reward coming in so I worked flat out all year, as well as raced. I am quite rundown, so I’m glad the season’s over and I was able to win with all the injuries I had and things like that. I want to race obverseas, but I’m not prepared to sacrifice the championship here, that’s for sure.

Well congratulations again, it all paid off in the end with two championships for Team Motul Honda and it was entertaining to watch throughout the season.

No worries, thanks for the support with CycleOnline during the championship and I look forward to 2015.