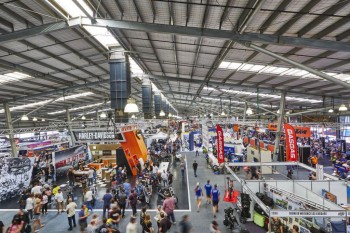 Both consumers and exhibitors have hailed the inaugural Moto Expo Melbourne at Melbourne Showgrounds last weekend a huge success.

Close to 20,000 people attended the event, which hosted the Australasian launches of 17 brand new motorcycles.

140 exhibitors participated in the event with Hall 1 a sight to behold, filled to capacity with the latest motorcycles, products and services.

Consumers took advantage of the opportunity to test ride a range of motorcycles, with Indian, Victory, Harley-Davidson and Yamaha test rides completely booked out across all three days.

Yamaha and Oset electric bikes hosted children’s come and try zones with many youngsters enjoying their first ride on a motorcycle under the guidance of experienced coaches.

“I was very happy with our first ever Moto Expo Melbourne,” Bayliss said. “Months and months of planning went into creating this event and we would like to thank everyone involved in bringing it all together.

“I would also like to say a special thanks to all the exhibitors, riders and entertainers who really brought the event to life. We look forward to the Sydney Motorcycle Show next year and will work hard to produce another fantastic, interactive event.”

FCAI CEO Tony Weber said he was pleased visitors to Moto Expo were able to experience the latest motorcycle technology and design trends, with many brands unveiling new motorcycle models never before seen in Australia.

“Overseas headquarters sending these new bikes down under shows confidence in the Australian motorcycle industry, which sells in excess of 100,000 motorcycles, ATVs and scooters each year,” said Weber.

“We are thrilled that almost 20,000 enthusiast visited the Show over the course of the weekend. The FCAI is pleased to continue our strong partnership with Troy Bayliss Events for 2015 Sydney Motorcycle Show.”

The Australian Motorcycle Finance Head2Head EnduroCross presented by Yamaha was a huge success with Tye Simmonds emerging victorious on Saturday and endurance racer Peter Boyle taking the win on Sunday.

“Yamaha Motor Australia fully supported the 2014 Moto Expo Melbourne and our investment has paid dividends,” Cotterell said. “We made our intentions clear from the outset by booking the biggest floor space, sponsoring the EnduroCross event, assisting with the custom build area, showcasing stunt rider Dave McKenna and by providing the largest amount of demo bikes for show goers to test ride.

“In addition, Yamaha revealed six new models at Moto Expo. I’m pleased to say that the event was an unqualified success. Our attending dealers took their largest ever amount of deposits for new bikes, while the demo area was packed out all weekend.

“We revealed the YZF-R1 both days at 10:00am to an enthusiastic crowd and an even larger number of show goers were on hand to witness McKenna’s tricks on his MT-09 turbo drift and stunt models.

“In fact the only element that did not go to plan was our factory riders crashing out of the Enduro X event, but that’s racing. Those who weren’t there missed a great spectacle,” Cotterell concluded.

The Baylisstic Scramble saw some of Australia’s most decorated racers battle on Melbourne Showgrounds Main Arena. After two days of intense racing it was Team Bayliss who took the overall title.

Crowds were entertained across the weekend with incredible stunts from Jack Field, Lukey Luke, Matt Mingay and Front Up Freestyle.

Plans are already underway for the successful event to return to Melbourne Showgrounds in 2016, which will be made even better with the air conditioning confirmed for the main exhibition building.

The Troy Bayliss Events team will now turn their attention to the Sydney Motorcycle Show, which will be held on 20-22 November 2015 at Sydney Showgrounds, Homebush.