Team Honda Racing’s Troy Herfoss was the big winner in the opening round of the 2015 Australian Superbike Championship (ASBK) at Phillip Island last weekend, claiming victory as the top WorldSBK teams and riders watched on. CycleOnline.com.au spoke to Troy this afternoon about that result and more. 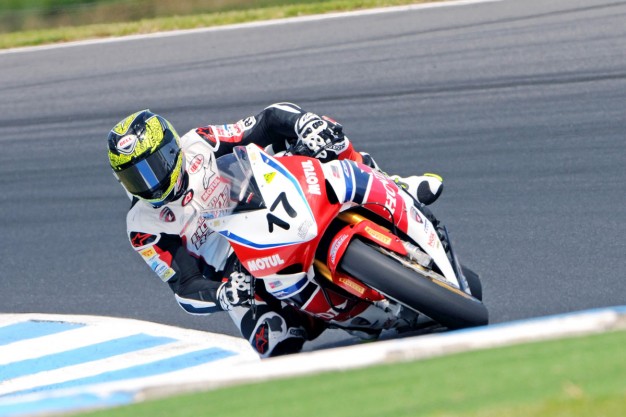 You got that first Superbike win at Phillip Island in the bag, so it must feel good to do that, especially in front of the World Superbike teams as well…

Yeah, it feels really good because I’ve never won on the Superbike there and you don’t realise how important it is to win on World Superbike weekend until you do it. You realise they’re paying attention once you’re up there winning some races and personally I feel great. I’ve made a big improvement since the GP last year, because the difference between Josh [Hook] and I there was about eight seconds over race distance, which wasn’t good enough. This time I was able to battle with him and managed to get the win in race two for the overall, so it was huge. It was a big improvement and a good way to start the year.

Yourself and Josh have been training together a lot lately, so what was it like going head-to-head with him for the overall on track?

It was great. He’s a good guy and an aggressive rider. I think we’ve got a similar attitude towards racing and similar styles. We both understand that each of us want to win and we knew what we were in for, so it was really enjoyable. We stayed together for a few weeks leading up to the race training together, so hopefully it helps him in Japan and it’s definitely helped me. We had a good time and it was good to put on a show in front of the world championship guys and also Honda, proving again the bike’s still at the top.

What was it like racing in the conditions over the weekend with high temperatures at times across the event?

It was really difficult actually. For the general person you’d think with the sun being out it’d be a great day for racing, but at Phillip Island in the heat it’s quite greasy. I think that’s what brought a couple of the guys undone in that first race that got cancelled on Saturday – it was just so hot and there was no grip. You had to be really careful and it showed in the lap times.

Honda hasn’t confirmed what they’re doing yet – we assume the ASC – but does leading the ASBK championship after round one give you the motivation at all to go for the championship there? Do you know much about that side of it?

To be honest, I don’t know the plan exactly. I know for sure we’re racing at Eastern Creek for the first round of the ASC and personally I would hope we race there against the most competitive guys. That’s what I think will happen… it’s a difficult situation really. MA have had their series forever, so I don’t really know what to expect, but it was good to do the first round. Like I said though, personally I just want to race against the best guys because that’s how you want to win and it makes you strive to be better. 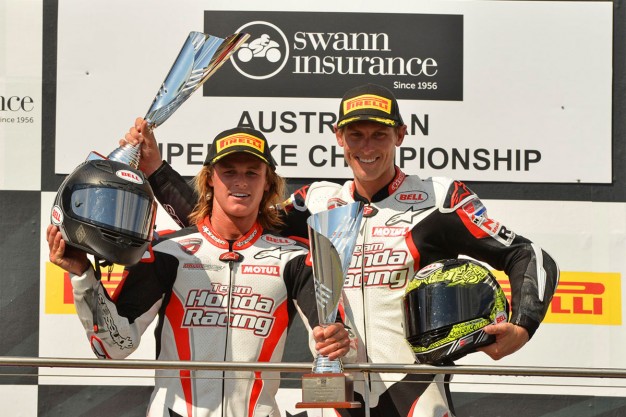 This time 12 months ago you were preparing for your comeback at a few track days, so how would you compare your feeling on the bike now compared to one year ago?

It’s not comparable. There’s no way in the world at this time last year that I could go to Phillip Island and win a race or the overall. When I got back on the bike around this time last year at Wakefield it was way, way harder than I ever imagined and I was so far off the pace the first day. The speed, the feeling with the tyres… everything. You shouldn’t have that long off the bike if you want to be competitive, so this year it’s been a huge difference. I have my race bike here with me at home now so I can go and practice, so it’s going to make a big difference as well. At Wakefield last year I was like 18th after the first few sessions, whereas this year I know I can go straight from pit lane and feel confident, knowing I can be extremely competitive from the start.

This year you’re on the factory team from the beginning, so considering Jamie [Stauffer’s] injuries at Phillip Island, how’s it feel to lead the charge for Honda now as such? We’re not sure when he will be back, but it must be exciting to fly the flag.

Yeah, it’s huge. It was obviously an extremely disappointing weekend for Jamie and it’s a bad injury to break your pelvis, so we don’t really know what his situation is at the moment. For me going into the first round, although they’re not putting any extra pressure on me, it looks like I’m the only Honda now and we’ve got some big shoes to fill from last year. I’m looking forward to it and I can’t wait. It’s so motivating knowing that we’re going up against Yamaha’s new bike and three really good riders on them, as well as everyone else, with more experience in the ASC’s format and on those tracks and tyres. Riding for Honda is the best company in the world, so I want to do my best and work on winning my first Superbike championship.

No worries, well congratulations on the success at Phillip Island and I think like everybody, we can’t wait to see you guys do battle once again in the ASC.

Thanks a lot, I’m definitely looking forward to it.