Brayden Elliott has achieved his first outright round win in the Supersport category. 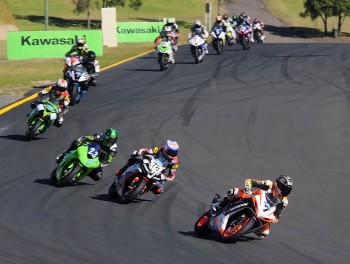 In just his second full season road racing, Brayden Elliott has achieved his first outright round win in the Supersport category at round one of the Swann Insurance Australasian Superbike Championship (ASC) at Sydney Motorsport Park, after recording his first overall podium in Saturday’s racing, Elliott went on to take the top step of the podium on Sunday.

Friday’s fifteen minute qualifying session saw Brayden secure the sixth fastest time with a 1:35.270 on lap four of six, placing him on the second row for Saturday’s first race. An improvement in his fastest lap of the weekend to a 1:34.647 in race one saw Brayden rise to claim third, a result he would subsequently maintain through the second and third seven lap events of the day, handing the Tumut rider first in B Grade and third overall for the first round of the AFX-SBK series, his first outright podium finish in National level road racing.

Starting from third in all three of Sunday’s Swann Series races, Brayden again went faster than his previous best lap time of the weekend, securing a 1:34.539 before finishing second. Two third place finishes in race two and three respectively helped to take Brayden to the top with his combined points from the three events in both the B Grade and overall Supersport standings.

“After our busy testing schedule in the lead up to the first round of the ASC at Sydney Motorsport Park, I felt quite confident heading into the weekend that we could achieve a good result. My goal was certainly to be on the outright podium in the Supersport class which I knew would be no easy task with a lot of very fast and capable riders within the field.”

“Our qualifying result of sixth gave us a little bit of work to do ahead of the races. I knew the areas I could focus on that would help improve my position and fortunately I was able to carry that into Saturday’s races. It was an amazing feeling to secure my first outright podium at a National level in road racing, it’s something I have worked really hard towards for a long time and for it to happen in the first round of the season is a great way to kick start our year.”

“To be able to carry my form through to Sunday’s races was incredible and more particularly to come away with the overall victory in the Swann Series for the round. It truly showed how our development and bike setup had paid off.

I can’t thank my family, my sponsors and my whole support team, in particular Shawn Giles and Phil Tainton enough for their ongoing hard work and efforts in helping me become the rider I am today. I am really looking forward to hitting the track again and carrying this momentum forward.”

Brayden’s next event is round two of the 2015 Australian Superbike Championship which takes place at Morgan Park, Warwick, Queensland from 10-12 April.