SA Kawasaki BCperformance team kick of their championship campaign for 2015. 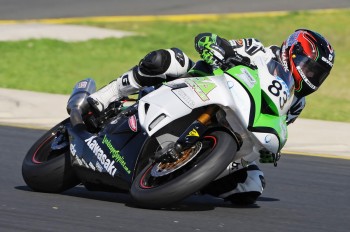 The first round of the Swann Insurance Australasian Superbike Championship saw the SA Kawasaki BCperformance team kick of their championship campaign for 2015, with the Superbike, Supersport and Ninja 300 Cup riders all racing for their first opportunity to snatch some 2015 championship points.

The three-day championship event was held in stunning Sydney, with the mornings crisp and days warm and dry. Friday’s Superbike qualifying session saw Superbike riders Ben Burke and Evan Byles qualifying in 12th and 13th respectively. Burke’s best lap came on his 8th loop, while Byles qualifying his fastest on only his second of seven qualifying laps. There was still plenty of work to do on set up for both bikes and with qualifying done on Friday, the Superbike team grouped together to get ready for Saturday’s racing.

Burke performed brilliantly on his Kawasaki ZX-10R during the first of Saturday’s Superbike races, coming in just behind factory Yamaha rider, Glen Allerton in 7th place, while Byles finished a little further back in 11th place. The second Superbike race saw both riders finish a little further back in the standings, with Burke in 10th and Byles in 13th, however the pace of both riders continued to improve.

Sunday’s racing brought both good and bad results – Burke unfortunately recorded a DNF in race one courtesy of a damaged sensor, while Byles finished in 12th position with his times continuing to drop with every outing. The second race on Sunday Burke cross the line in 9th position and Byles in 12th, both continually improving their times with their ability to make use of the set up changes done by the team.

“It was great to be back on the bike again and to start a new season” commented Burke “The weekend didn’t go to plan as we had a few hiccups along the way, resulting in a damaged sensor, causing my DNF in race one on Sunday. Although I was happy with my riding over the weekend, I believe we still have more to come from both the Kawasaki ZX-10R and me. Thanks must go out to the sponsors that keep us on track”

Byles also commented that he “had a very satisfying weekend! It was my first FX and ASC event and I was impressed with the very professional running of the meeting. I found big improvements in bike set-up during each session and this created personal best times each time on track. We care happy to take home points in this elite level and discover things we can improve prior to round two at my home track at Mallala”.

For the first ASC round, the SA Kawasaki BCperformance team had both Supersport riders on board with Buckley back to race fitness again after an unfortunate crash earlier in the year. Qualifying conditions were perfect and Young qualified 12th and Buckley in 15th. Both bikes required more set up changes in order to get them ready for the first race on Saturday morning. With tireless work from the team mechanics, the bikes were prepared and ready to race the following morning.

Saturday’s race one had both riders champing at the bit to race with the results showing just how keen they were with Young crossing the line in 7th and Buckley in 13th. In race two, Buckley gained a place and Young lost one, but their times were still improving. The third race brought the two supersport riders closer together again with Young in 10th and Buckley in 11th. Despite losing some places, the set up of Young’s bike had improved greatly in preparation for Sunday, while Buckley was gaining more confidence in his new ride and making minor changers along the way. The fruits of Saturday’s labours showed in race one on Sunday with Young finishing a fantastic 6th and Buckley in 10th. Race two brought even better results with Young in 5th and Buckley finishing 8th. Race three had Young in 5th again and but Buckley didn’t fair quite as well, finishing in 13th position.

Paul Young mentioned that “it was a tougher weekend than I had envisaged and frustrating not to be right up at the front but we weren’t far away and to be equal fifth in the points after round one isn’t too bad either.” Buckley was equally optimistic; “After starting the weekend on the back foot, it was all ahead of us to try and make up three days of testing and development during Friday’s practice. Towards the end of the weekend, I was starting to feel comfortable on the bike, pushing to be back where I was before my accident in February. Looking forward to round two, with a lot of testing between now and then to come back in even stronger form. A huge thanks must go to SA Motorcycles BCperformance team for their hard work over the weekend and all of my personal supporters for their efforts in this year’s racing”.

The round one of the ASC was the first outing for the Ninja 300 Cup riders, with Di Jones back for another year with the SA Motorcycles BCperformance team, however was starting behind the eight ball having been unable to do any preseason testing due to work commitments. The second Ninja 300 spot in the garage had been unexpectedly vacated and was immediately filled by young gun, Jimmy Broadbent.

It was going to be a huge learning curve for Broadbent, but he managed to slot in really well, finishing Saturday’s first race in 6th, while Jones finished 20th overall and first in the Ladies classification. The following two races had Jones register a DNF due suspension issues and then 16th in the final race of the day. Broadbent came in seventh in race two with another great ride but unfortunately finished much lower down the order after coming into contact with another rider during the final race of the day. Sunday’s racing began full of promise for both Jones and
Broadbent but unfortunately, due to a minor crash in the first race, Broadbent was unable to contest the final two races for the weekend.

Jones, on the other hand, continued to struggle with the set up of her Ninja 300, recording a 19th, 22nd and 18th over the three Sunday races. Jones mentioned that; “round one proved to be a difficult weekend and I was really disappointed with my performance. Looking forward to getting some issues sorted and being back on the pace for round two. Many thanks to our sponsors, particularly SA Motorcycles and Held for their support over the weekend.”

Moving forward, the SA Motorcycles BCperformance team will be preparing for the second round of the ASC at the Mallala circuit in South Australia on the weekend of the 15th, 16th and 17th of May.